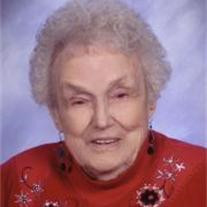 FORT WORTH -- Abbie Taliaferro Tubb Zeig, 94, a loving mother, grandmother, great-grandmother and great-great-grandmother, died peacefully Sunday evening, June 17, 2007 at the home of her granddaughter in Mansfield. Funeral: 1 p.m. Thursday in the Sanctuary of Park Temple Baptist Church, 2832 Townsend Drive. The Rev. Tom Fatka will officiate. Burial: Abbie will be laid to rest next to her first husband, J. B. Tubb in Laurel Land Memorial Park. Visitation: She will lie in state on Wednesday in the Drawing Room at Robertson Mueller Harper from 11 a.m. to 5 p.m.; her family will receive friends at the church from noon to 1 p.m. Thursday. Memorials: Consideration of contributions to a charity of one's choice, in memory of Abbie, is suggested. A native of Kaufman County, Abbie was born July 31, 1912, the daughter of Albert Sidney and Gerome Elizabeth Taliaferro. She was married to J. B. Tubb, who died in 1964, and Al Zeig, who died in 1989. Abbie was a longtime member of Park Temple Baptist Church where she taught Sunday school for over 50 years. She retired as manager of the Student Center at Southwestern Baptist Theological Seminary. In addition to her husband, parents and siblings, Abbie was preceded in death by her son, Johnny and infants, Sidney Richard and Roma Ann, a grandson, Richard Wright, and son-in-law, Earl Wright. Survivors: Children, Fawn Tubb Wright of Fort Worth, Barbara Tubb Smith and her husband, Kenneth of Scurry; and Joe Tubb and his wife, Nadine of McKinney; grandchildren, Linda Brock and James, Vicky Raney and Jerry, Kenny Smith and Jeri, David Smith and Terri, Tammy McArthur and Benny, Paul Pickett and John, Angie Powell and Jonathan, Sherry Rodriguez and David, Johnny Tubb and Teresa, Pam Tubb and Gary Tubb; 22 great-grandchildren; 20 great-great-grandchildren; and several nieces and nephews.Robertson Mueller Harper Funerals & Cremations 1500 Eighth Ave., 817-924-4233

The family of ABBIE ZEIG created this Life Tributes page to make it easy to share your memories.