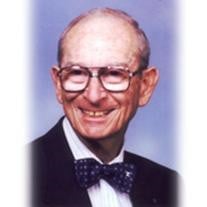 FORT WORTH -- Alfred "Shuggie" Cohen died peacefully just after midnight on Friday, Jan. 13, 2012, during his 93rd year. Service: 1 p.m. Sunday in the Barnett Sanctuary at Congregation Ahavath Sholom, 4050 S. Hulen St. Following committal prayers, Shuggie will be laid to rest next to his wife, Eva Dale, in Laurel Land Memorial Park. Minyan services will be held at the synagogue beginning at 6 p.m. Sunday. Memorials: In lieu of flowers, consideration of contributions to Congregation Ahavath Sholom, the Jewish Family Service Senior Program or a charity of one's choice, in Shuggie's memory, is suggested. Shuggie, as he was universally known, was born Aug. 29, 1918, in Fort Worth, the second son of Lazarus and Rebecca Cohen. He grew up in Wichita Falls, where his family moved when he was a young boy. Shortly after graduating from Wichita Falls High School in January 1936, where he played for the Coyote football team, sang at school assembly and excelled at track, Shuggie went to work for Peakcock's Jewelry in Monroe, La. It was there that he met, fell in love and married Eva Dale Coon, his beloved wife of 62 years. Sadly, Eva Dale preceded Shuggie in death in 2002. In 1947, Shuggie returned to Wichita Falls, where he worked for Zales Jewelry until 1964, when Zales transferred him to Laredo. In 1976 he was named "Manager of the Year" for the entire Zale Jewelry chain of over 1,000 stories. Shuggie retired in 1978 and returned to Fort Worth in 1984 to live closer to children and grandchildren who had settled in the area. Shuggie had been an active member and official greeter of Congregation Ahavath Sholom for the past 27 years. He had also been a key participant in the Jewish Family Service Senior Program. In 2009, Shuggie received the exceptional honor of being named B'nai B'rith's "Jewish Person of the Year" in Fort Worth. Throughout life, Shuggie's foremost loves - other than his family - were people, young and old; music, both singing and dancing and especially the tunes of yesteryear; and a good round of golf. His favorite quote, which he used often, was, "If you see someone without a smile, loan him yours." Shuggie was preceded in death by his parents; two brothers, Daniel "Bub" Cohen and Walter Cohen; two sisters, Miriam Yaffe and Dolly Rose Smith; and his son-in-law, State District Judge Joe Drago. Survivors: In addition to his daughter, Diane Cohen Drago, Shuggie is survived by his sons, Richard L. Cohen and Grisselle and J. David Cohen and Alma; grandchildren, Joseph Alan Drago, Jon David Drago and Jennifer, Sarah Drago Goggann and Brandon, David Cohen and Christine and Rebecca Cohen Maritt and Roy; great-grandchildren, Renee, Gabby, Emma and Sophie Drago, Caroline and James Goggann, Kaylee, Zac and Rylee Cohen and Eva, Owen and Nolan Maritt; and nieces and nephews and their families. Also, Shuggie felt especially fortunate to have been "adopted" by the Allen family, Sheri, Richard, Jeremy, Rebekah and Emily. Robertson Mueller Harper Funerals & Cremations 1500 Eighth Ave., 817-924-4233

The family of ALFRED COHEN created this Life Tributes page to make it easy to share your memories.