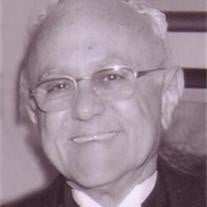 FORT WORTH -- Alvin Louis, 83, died Friday morning, June 19, 2009, after a short battle with colon cancer.        Service: 11 a.m. Sunday in the Kornbleet Memorial Cemetery Chapel, 411 N. University Drive. Dr. Javier Smolarz, ritual director, will officiate. Visitation: His family will receive friends at the residence of Peggy Louis Norris with minyan service beginning at 6 p.m.        Bearers of his casket will be Mark Alterman, Nate Berman, Marvin Brozgold, Jerry Scott, Harold Sonkin, Jerry Sonkin and Chuck Spinks. Honorary bearers will be David Luskey and Irv Rovinsky.        Memorials: In lieu of flowers, please honor Alvin's wishes by making a donation to the Muscular Dystrophy Association, MDA.org, or to the American Cancer Society.        A native and life resident of Fort Worth, Alvin was born March 25, 1926, the son of Arthur and Sadie Bronstein Louis. He was loved and known as "Uncle Bubba" by his numerous nieces and nephews, "Blackie" by his cherished friends and his most beloved name of all was "Papa," given to him by his angel of a grandson, John.        Alvin was preceded in death by his parents; brother, Donald Louis; and his sister, Doris Faye Louis Sonkin.        Survivors: His daughters, Sarah Ann Louis of Fort Worth and Le'Ann Louis Spinks and her husband, Chuck, of Aledo; beloved grandson and angel, John Spinks of Aledo; sister, Charlotte Sue Louis Alterman and her husband, Richard; and numerous nieces, nephews and cousins and their families. Robertson Mueller Harper Funerals & Cremations 1500 Eighth Ave., 817-924-4233

The family of ALVIN LOUIS created this Life Tributes page to make it easy to share your memories.