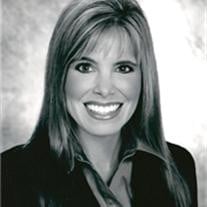 COLLEYVILLE -- Amy Kathleen Jones passed away Friday, June 19 at Baylor Hospital in Dallas, Texas of renal cell carcinoma, the same disease that took the life of her father ten years ago. A native of Ft. Worth, Amy was born to Neil and Donna Gillam Jones on January 31,1969. She lived her entire life in the Ft. Worth and Mid-Cities area. She was a graduate of Grapevine High School and Dallas Baptist University where she obtained her Bachelor's Degree and Master's Degree in Professional Development.        A Memorial Service will be held at the Berg Center on the Campus of Dallas Baptist University at 2:00 PM on Friday, June 26 followed by a Celebration of Life and Reception in the Mahler        Center on the University campus. A private family burial preceded these services.        In lieu of flowers Amy requested that memorial gifts be sent to Dallas Baptist University, 3000 Mountain Creek Parkway, Dallas, TX 75211 or Journey of Sisters Ministry, 1540 Keller Pkwy., Suite 108, #107, Keller, TX 76248.        Amy was a featured speaker and trainer for Ziglar, Inc. She also traveled throughout the United States as a speaker and emcee for Tamara and Peter Lowe's "Get Motivated" business seminars.        Amy strongly supported volunteerism which led to her receiving her local Chamber of Commerce's Community Spirit Award. While participating in the Miss Texas Scholarship Pageant System, she was given the state-wide Quality of Life Award for her presentations in schools throughout the state. She enjoyed planning, organizing, and carrying out fund raising events for local and national non-profit organizations. Always a supporter and promoter of her alma mater, Amy served on the Board of Trustees for Dallas Baptist University as well as serving as president of the DBU Women's Auxiliary Board. Amy was an award-winning ventriloquist who, along with her "sidekick" Rusty, entertained for community organizations,business conventions, and church groups. In addition to being a speaker and performer, Amy        was also a writer. Her book "Twice as Much in Half the Time" was published in April by Simple Truths Publishing Company.        Amy had a passion for helping others and for sharing her faith. This led her to founding a ministry "Journey of Sisters." The fourteen "sisters" minister to women in crisis situations (such        as those in homeless shelters) and also conduct church conferences for women. This ministry will be actively carried on by the remaining "sisters" in the group.        Amy was known for her winning smile, her positive attitude, her love of family and friends, and her faith in God. Her life verse was Jeremiah 29:11 which she frequently shared in her Christian testimony. Amy touched the lives of all who knew her. "To God be the glory!"        Amy is survived by her mother Donna Gillam Jones, her brother and sister-in-law Dr. Barry and Kim Jones and their two sons Will and Pierson, and by Joe Elmore, along with many other friends and relatives. The family wishes to thank Joel Allison and Leslie Shelton; Doctors Coyle, Reese, and Cassanova; and all the sixth floor nurses and staff members at Baylor University Medical Center for their medical expertise and loving care of Amy during her last weeks of life.

COLLEYVILLE -- Amy Kathleen Jones passed away Friday, June 19 at Baylor Hospital in Dallas, Texas of renal cell carcinoma, the same disease that took the life of her father ten years ago. A native of Ft. Worth, Amy was born to Neil and Donna... View Obituary & Service Information

The family of Amy Jones created this Life Tributes page to make it easy to share your memories.