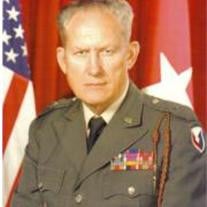 MANSFIELD -- Anthony F. Daskevich, 87, of Mansfield and a retired U.S. Army brigadier general, passed away peacefully Tuesday, Sept. 19, 2006, surrounded by his wife and beloved family members. Mass of Christian Burial: 12:30 p.m. Friday at St. Jude Catholic Church, Mansfield. Burial: 2:30 p.m. Friday in Dallas-Fort Worth National Cemetery. Visitation: 5 to 7 p.m. Thursday, followed by a brief scriptural service at 7 p.m. at Blessing Funeral Home, 401 Elm St., Mansfield. Memorials: In lieu of flowers, the family requests memorials be made to Army Emergency Relief, 200 Stovall St., Alexandria, Va. 22332. Brig. Gen. Daskevich was born in Mingus. He entered the Army in 1941 and served in Europe during World War II. His combat decorations include the Distinguished Service Cross, two awards of the Silver Star, the Bronze Star and the French Fourragere. He also twice received the Purple Heart. He continued his service in the Army for a total of 34 years, rising to the rank of brigadier general. After his retirement, he continued to serve his family, community and church in Mansfield, where he had resided for the past 30 years. Brig. Gen. Daskevich was a much-loved and respected man who provided a sterling example of integrity, dignity and dedicated service to the nation, love of family and devotion to God. He was preceded in death by his parents, Valeria and Joseph Daskevich of Ranger; and brother, Joe Daskevich of Midland. Survivors: His loving wife of 60 years, Marie; his daughters, Lynda Hinds of Arlington and Dorothy Ford of Granbury; his sons Anthony of Fort Sill, Okla., and Daniel of Granbury; two grandchildren; five great-grandchildren; and his sisters, Helen Hood, Louise McGee, Betty Yeager and Faye Basham, all of Fort Worth.

The family of Anthony Daskevich created this Life Tributes page to make it easy to share your memories.

MANSFIELD -- Anthony F. Daskevich, 87, of Mansfield and a retired...