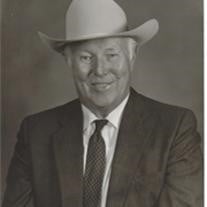 Archie Brownlee Scott died suddenly on Wednesday, Nov. 26, 2008, in Mansfield, ending a full, rich life. Memorial service: 11 a.m. Saturday at Blessing Funeral Home Chapel in Mansfield. Memorials: Those wishing to make memorial contributions may make them to the West of the Pecos Museum, P.O. Box 1784, Pecos, Texas 79772 or online at www.westofthepecosmuseum.com/pgs/donations.php. He was born on Aug. 20, 1917, in Hot Springs, N.M., to Lina Brownlee and Harold Scott but lived most of his life in Pecos. After graduating from Pecos High School, he attended Tarleton State University. In 1938 Archie Scott began a distinguished 50-year banking career at the Security State Bank in Pecos, first as both bookkeeper and custodian and ultimately serving as president, CEO, and chairman of the board. He also sat on the board of the Federal Reserve Bank of El Paso, the Texas Bankers Association Governing Board, the American Bankers Association, and as agricultural advisor to the Board of Texas A&M University. Archie Scott received numerous honors and served his community on countless boards and committees, but he was proudest of the work he did as board member and president of the West of the Pecos Museum, which opened in 1963 and became a centerpiece of the Pecos community. For several decades Archie Scott took great pleasure in sharing his special love of geology and specifically geodes with hundreds of guests who visited his home. In a backyard shop, he would offer a guest a choice from a pile of gnarled, round rocks. He would deftly fit the chosen stone into his rock saw and when the stone was cut, he would say to his guest, "Stand right there. As I lift the lid to this saw, you will be the first person ever to see what is on the inside of your rock." Each guest was allowed to keep half the geode; Scott saved the other half and eventually donated his collection to the Science Department of Texas Christian University. Archie Scott was an honorable, generous and loving man who will be missed by friends and family. He was preceded in death by his wife of 36 years, Mary Self Scott. Survivors: Wife of 32 years, Mary Margaret Scott; children, John Dan Scott, Robin Scott, Mary Kate Sipes, Doris Bassett and Mary Claire Steward; 15 grandchildren; and seven great-grandchildren.

The family of Archie Scott created this Life Tributes page to make it easy to share your memories.