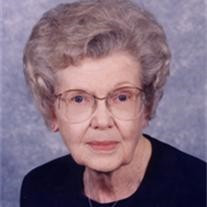 FORT WORTH -- Berniece Elizabeth Whitfill Tillery, 96, a loving mother, grandmother and aunt, died peacefully Friday morning, Aug. 15, 2008. Funeral: A Mass of Christian Burial will be celebrated at 10 a.m. Tuesday at St. Andrew Catholic Church, 3717 Stadium Drive. She will be laid to rest next to her husband, Lester, in Laurel Land Memorial Park. Visitation: Mrs. Tillery will lie in state on Monday at Robertson Mueller Harper. Her family will receive friends from 6 to 8 p.m. with recitation of the holy rosary beginning at 7 p.m. Bearers of her casket will be her son-in-law, Michael Edmonds; grandsons, Kent Woynowski and Grant Woynowski; and nephews, David Whitfill, Larry Whitfill, Frank Henry and John Henry. Honorary bearers will be family members, Herman Henry, Ed Henry, Jarrell Whitfill, Don Whitfill, Gary Whitfill, Barry Whitfill, Cliff Whitfill, Leo Durbin and Paul Durbin. Memorials: Consideration of contributions to the Sisters of Saint Mary, 909 W. Shaw St., Fort Worth 76110; or to a charity of one's choice, in Berniece's memory, is suggested. Born Aug. 9, 1912, in Crowley, Berniece was the daughter of south Tarrant County pioneers, John William and Josephine Fowler Whitfill. Whitfill Park in far south Fort Worth honors the Whitfill family. Berniece was a 1930 graduate of Our Lady of Victory school. She married Lester E. Tillery on Nov. 23, 1939. Together, they made their home in the TCU area, where they raised their two daughters. Lester died Aug. 9, 1986. Mrs. Tillery and her husband were charter members of St. Andrew Catholic Church where she was a member of the Altar Society and volunteered for a number of years in the church office. She was an avid gardener and enjoyed her membership in the Worth Hills Garden Club. Berniece was also an excellent cook and an accomplished seamstress. She made clothes for herself, her daughters and her grandchildren for many, many years. In addition to her parents and husband, Berniece was preceded in death by her siblings, Mabel Bamber, Esther Henry, Ada Henry, Ed Whitfill, Arthur Whitfill, Lillian Durbin, Jim Whitfill and Ray Whitfill, as well as members of their families. Survivors: In addition to her daughters, Ann Tillery Edmonds and her husband, Michael, of Arlington, and Marynell Tillery Woynowski of New Orleans, La., Berniece is survived by grandchildren, Lisa Edmonds, Kent Woynowski and his wife, Leslie, and Grant Woynowski; her sisters-in-law, Syble Whitfill and Dorothy Tillery; a large extended family; and many friends. Robertson Mueller Harper Funerals & Cremations 1500 Eighth Ave., 817-924-4233

The family of BERNIECE TILLERY created this Life Tributes page to make it easy to share your memories.