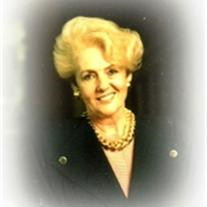 FORT WORTH -- Billie Lucille Shelton Parker passed away peacefully Monday evening, Jan. 30, 2012. Service: 11 a.m. Friday at Central Christian Church, 3205 Hamilton Ave. She will be laid to rest next to her husband, Earle, in Greenwood Memorial Park. Visitation: Family and friends will gather 5 to 7 p.m. Thursday in the Great Room at Robertson Mueller Harper. Memorials: In lieu of flowers, consideration of contributions to the Christian Arts Museum of Fort Worth, 3205 Hamilton Ave., Fort Worth, Texas 76107. Billie Lucille Shelton Parker was the youngest of four and the only daughter of Arthur and Lucille Shelton. She grew up on Fort Worth's north side and graduated from North Side High School. She was a longtime member of Boulevard Christian Church until she married her beloved husband, Earle North Parker, and transferred her membership to Broadway Baptist Church. Most recently she was a member of Central Christian Church. Billie was an avid golfer and tennis player. She was well known for her cooking and devotion to family. It's impossible to talk about Billie without her husband, Earle, since they were inseparable. They married in Las Vegas on July 22, 1973, with their longtime friends, Bobby and Marjorie Malone, at their side. Billie and Earle were best known for their philanthropic efforts in many worthy causes. They became a fundraising force that was notable for raising large amounts of money at some of the most exciting and entertaining events at which they often hosted. Billie and Earle arranged galas that benefitted everything from the March of Dimes and the Air Force Association's Military Ball to the Taste of Fort Worth, as well as the 1996 U.S. Olympics. Her most recent fundraising efforts were directed towards the Christian Arts Museum. While Billie was very proud of their fundraising efforts, the accomplishment she was most proud of was her appointment by Texas Gov. Bill Clements to the University of North Texas Board of Regents. Billie served as a regent from 1987 to 1993. She was preceded in death by her beloved husband, Earle North Parker; father and mother, Arthur and Lucille Shelton; brothers, A.J. and Ray Shelton; brother and sister-in-law, Bob and Doris Shelton; sister-in- law, Bonnie Kutcher; and stepson, Earl Whitney Parker. Survivors: In addition to their children, Wayne and Charlie Wright, Theresa and Robert Anderson, Billie is survived by her adopted family, Jeff and Becky Green; former daughter-in- law, Marsha Wright; sister-in-law, Helen Shelton; stepchildren, Al Parker, Shannon and Mike Males and Kelli Parker; grandchildren, Kelly and Kent Lynch, Susie and Jonathan Mays, Lee Wright, C.J. and Vera Wright, Wendy Wright, Josh and Taylor Green, Michael and Natalie McDonald, Cory and Melody Lanier, Chase and Misty Spradley, and Natalie and Zac Pittman; and 25 great-grandchildren. Robertson Mueller Harper Funerals & Cremations 1500 Eighth Ave., 817-924-4233

The family of BILLIE PARKER created this Life Tributes page to make it easy to share your memories.