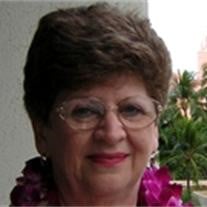 Barbara McCarthy went to be with our Lord on Monday, July 14, 2008 at the age of 66. She passed away surrounded by her family in the comfort of her home in Mansfield, Texas.She was born on August 26, 1941 in Dilley, Texas to Walter William Starnes and Nora Louise Starnes (Bill & Louise). Barbara attended Millett Elementary School and graduated Dilley High School in 1959. She obtained her nursing degree a few years later.She also attended a well known Decorating and Designing school in Georgia. As we all know, Barbara was very talented in decorating and flower arranging. Barbaras close friends Pat and Dwight Brown, set her up on a blind date with one of Dwights Army friends. She married Stanley Ray McCarthy that same year in Dilley, Texas on July 17, 1965. Barbara was a nurse at many hospitals and doctors offices around the military bases were Stan was stationed. They retired from the Army in 1974 and settled in Portland, Texas, just 2 blocks away from Pat and Dwight. Barbara stayed at home to raise their two children, Doyle and Angela. And when the children were old enough, Barbara accepted a job as Office Manager at First Assembly of God Church, now known as Cathedral of the Palms, in Corpus Christi, Texas. Barbara is survived by her husband of 43 years, Stanley Ray McCarthy. Her wonderful mother, Nora Louise Starnes, who still lives in Dilley, Texas. Her son, Doyle Ray McCarthy and his wife, Melissa, of McKinney, Texas. She also left behind her daughter, Angela Denys Shook and her husband, Wayne Lee Shook of Mansfield, Texas. She has four beautiful grandchildren, Justin Wayne Shook, Bryana Lee Shook, Chandler Ray McCarthy, and Courtney Lauren Shook. As well as her three brothers, Walter Starnes and his wife Darlene, Ray Starnes and his wife Marilyn, Royce Starnes and his wife Donna. Many wonderful nephews, nieces, cousins, aunts, uncles and friends, also survive her.Barbara will be laid to rest at the Dallas, Fort Worth National Cemetery.In lieu of flowers Memorial donations can be made to Barbaras niece, Reverend Autumn Starnes in ministry to Thailand. Reference Missionary Associates acct # 270354Mail to: Assemblies of God World Missions1445 North Boonville Ave.Springfield, MO 65802-1894

Barbara McCarthy went to be with our Lord on Monday, July 14, 2008 at the age of 66. She passed away surrounded by her family in the comfort of her home in Mansfield, Texas.She was born on August 26, 1941 in Dilley, Texas to Walter William... View Obituary & Service Information

The family of Barbara McCarthy created this Life Tributes page to make it easy to share your memories.

Barbara McCarthy went to be with our Lord on Monday, July 14,...