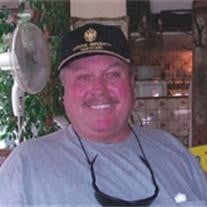 FORT WORTH -- Bernard "Bernie" McGarry Jr., 71, passed away suddenly Wednesday, April 25, 2012. Celebration of life: 7 p.m. Thursday at Lucas Funeral Home, 1321 Precinct Line Road in Hurst. Additional services will take place in Boston at a later date. Memorials: In lieu of flowers, gifts to charities of your choice will be appreciated. Bernie was born in Boston, Mass., Sept. 1, 1940, to Bernard George and Marie Skinner McGarry. After graduating from St. Sebastian High School, he studied and graduated in 1963 from the Wharton School at the University of Pennsylvania with a business administration degree. Bernie was an accomplished business man. He was a resident of Tarrant County since 1981. He was owner of a local Ford dealership in Hurst and he was part owner of Landmark Bank Mid-Cities in Euless and became director in 1989. He was an avid sports fan. In any sport he could tell you who, what, where and when without hesitation. He loved hanging out at the Big Apple in Arlington where he made lifelong friends. He loved to travel. He was a giant to all those who knew him and a very generous man to all. Survivors: Son, Bernard McGarry III and his mother, Kathleen McGarry-Gillis of Falmouth, Mass.; sister, Karen McGarry Karp of New York; uncle, John McGarry and his wife, Marietta, of Chevy Chase, Md.; his girlfriend, Carolyn Ray; his beloved pet and pal, Angel; numerous nieces, nephews and cousins; and many lifelong friends.

The family of Bernard McGarry, created this Life Tributes page to make it easy to share your memories.