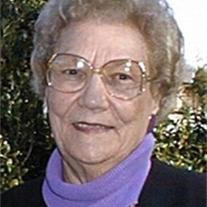 BEDFORD -- Bernice Welker McElwee Haines peacefully passed away of natural causes on April 4, 2009 in Bedford, Texas at the age of 93. Bernice Haines was a warm and generous friend to many, a loving wife and mother, as well as an adored grandmother and great-grandmother who instilled in her family the centrality of her strong faith and the importance of helping others.              Funeral: A funeral service was held for Bernice Haines at Lucas Funeral Home, 137 East Hill, Keller, Texas 76248, (817) 753-6800, on Tuesday, April 7 at 11:00 am, with viewing hours from 9:00 - 11:00 am. A second service will be conducted at Cunningham's Funeral Home, 2429 Wilmington Road, New Castle, Pennsylvania 16105, (724)658-4511, on Thursday, April 9 at 11:30 am, with viewing hours from 9:30 - 11:30 am. Burial will take place at Oak Park Cemetery in New Castle.              Memorials: In lieu of flowers, memorial contributions may be made in the name of Bernice Haines to the Community Ministry Fund (Account 800-227) at First Baptist Church of Keller, 225 Keller Parkway, Keller, Texas, 76248. Phone (817) 431-2545. (This fund assists regional residents with critical survival needs such as food & housing, etc.)              Born September 4, 1915 in New Castle, Pennsylvania, to F. E. Welker and Verna Welker, she grew up in a large and loving family of twelve children and spent most of her life in Western Pennsylvania. A gifted vocalist, in her early life she traveled throughout the country with her two sisters in a gospel trio for a number of years. She then worked as a bookkeeper in Fort Smith, Arkansas, where she met and married G. T. McElwee in 1942. They returned to New Castle, Pennsylvania where they had a son and daughter and where she worked most of her adult life as bookkeeper in her family's nursery business, Welker's Greenhouses, along side of her three brothers. G. T. McElwee passed away in l966.              In l968 she married Lester S. Haines, who also had a son and daughter. Their combined family now lived in Lower Burrell, Pennsylvania and they were members of New Kensington Baptist Church. Bernice Haines became a volunteer at Allegheny General Hospital, delivered meals for the Meals on Wheels Program and was also an active member of the Lower Burrell Garden Club. She became a talented artist, painting on china and porcelain and enthusiastically practiced a variety of crafts, including candle-making and dried flower arranging. In 2000, the couple moved to a retirement community in Butler, Pennsylvania.              In 2002, they moved to Keller, Texas where they attended Keller First Baptist Church. Lester Haines passed away in 2006. Bernice Haines was also preceded in death by her brothers, Elmer Welker, Fred Welker and Kenneth Welker, as well as her sisters, Maxine Cater and Lou Smith.              Survivors: She is survived by her four children, G. Thomas McElwee, Jr. and his wife, Linda McElwee of Colleyville, Texas, Kathy (Haines) Janik and her husband Ed Janik, of New Bethlehem, Pennsylvania, Jan McElwee Osborn and her husband Henry Osborn of Burbank, California, and Curt Haines and his wife Barbara Haines of New Cumberland, Pennsylvania, as well as two grandsons, Tom McElwee and his wife Jamie and Michael McElwee and his wife Karen, of Keller, Texas, and four great-grandchildren, Madison, Cole, Parker and Cameron McElwee. Bernice Haines is also survived by two sisters, Mae Atkins of Orlando, Florida, and Meam Hill of Prescott, Arizona, as well as four brothers, Russ Welker, Bob Welker, Hank Welker, and Richard Welker of Orlando, Florida. Lucas Funeral Home Keller, 817-753-6800 Top of Form Bottom of Form Bottom of Form © 2004 Cbeyond Communications. All Rights Reserved.

BEDFORD -- Bernice Welker McElwee Haines peacefully passed away of natural causes on April 4, 2009 in Bedford, Texas at the age of 93. Bernice Haines was a warm and generous friend to many, a loving wife and mother, as well as an adored... View Obituary & Service Information

The family of Bernice Haines created this Life Tributes page to make it easy to share your memories.