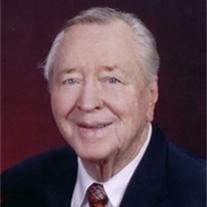 FORT WORTH -- C. Victor Thornton, 93, passed away peacefully Saturday night, April 5, 2008, with his wife of 71 years, Peg, by his side. Memorial service: 2 p.m. Tuesday at University Christian Church, with a reception to follow in the Fellowship Hall. Vic, one of four brothers, was born Feb. 8, 1915, in Salt Lake City, Utah, to Charles Victor Thornton and Winnie May Thornton. In 1935 he graduated with honors from the University of Utah with a B.S. in civil engineering and, on April 17, 1937, married Margaret Louise Wiggins in Youngstown, Ohio. They moved with son, Charles, and daughter, Carolyn, to Fort Worth in 1945. Vic was bright, determined, hard working and ambitious. He and his brother, Lloyd, started Thornton Steel Company, a steel fabrication company, later changing the name to Thornton Industries, Inc.; Western Steel Company and Southview Corporation, a real estate development company, in Corpus Christi; and various other enterprises in Fort Worth. He was very active in the community, usually in leadership roles. He was chairman of the Tarrant County Highway Development Association in 1957; chairman of the Fort Worth Bond Screening Committee in 1958; president of the Fort Worth Chamber of Commerce in 1960; member of the Tarrant County Water Board from 1972 to 1988, serving as its chairman from 1984 to 1988; member of the Dallas-Fort Worth Railtran Policy Committee; board member of the Southwest Exposition and Livestock Show; and the Fort Worth Aviation Board. He was a member of the Exchange Club. His charitable and social endeavors included serving as president of Colonial Country Club in 1956, potentate of Moslah Shrine Temple in 1959, imperial potentate of the Shrine of North America in 1971-72, and chairman of the Shriners Hospitals for Crippled Children from 1977 to 1982. He also served as a board member of the Longhorn Council, Boy Scouts of America, Casa Manana Musicals, the Fort Worth Opera, and as chairman of the 1989 Annual Campaign of the Arts Council of Fort Worth and Tarrant County. Vic had a passion for flying, photography, travel, railroading and his family. He and Peg traveled widely throughout the world, often with one or more of their children and their families in tow. All were subjects of Vic's movies, which he produced with commentary and music. He and Peg have been members of the University Christian Church since 1946. He served as chairman of the board of elders in 1957 and on its board of trustees. Survivors: Vic is survived by his wife, Margaret L. Thornton; their children, Charles V. Thornton III and his wife, Suzanne of San Francisco, Carolyn L. Moorhouse and her husband, John of Seymour and David F. Thornton and his wife, Sharyn of Fort Worth; grandchildren, Christopher Bessey and his wife, Jan, Matthew Victor Thornton and his wife, Chelsea, Joshua D. Thornton and his wife, Julie, Jeremy F. Thornton, Kelly Ann Livingston and her husband, Reno, John Ryan Moorhouse and his wife, Collette, Tela Thornton and Kirby Thornton; five great-grandchildren; brother, W. Lloyd Thornton and his wife, Ann of Fort Worth; and several nieces and nephews in Fort Worth and Salt Lake City, Utah. Robertson Mueller Harper Funerals & Cremations 1500 Eighth Ave., 817-924-4233

FORT WORTH -- C. Victor Thornton, 93, passed away peacefully Saturday night, April 5, 2008, with his wife of 71 years, Peg, by his side. Memorial service: 2 p.m. Tuesday at University Christian Church, with a reception to follow in the Fellowship... View Obituary & Service Information

The family of C. THORNTON created this Life Tributes page to make it easy to share your memories.