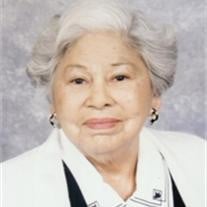 FORT WORTH -- Carmen Garza Galvez, 92, died peacefully Saturday evening, June 27, 2009, at her residence.        Funeral: A Mass of Christian Burial will be celebrated at 10 a.m. Wednesday at St. Andrew's Catholic Church, 3717 Stadium Drive. Following committal prayers, Carmen will be laid to rest next to her husband, Lorenzo, in Laurel Land Memorial Park. Visitation: She will lie in state Tuesday afternoon in the Chapel at Robertson Mueller Harper; family and friends will be received after 6 p.m., with a recitation of the Holy Rosary beginning at 7 p.m.        Bearers of her casket will be her grandsons, Chris Yarbrough and Matt Yarbrough; her great-grandsons, Alex Anders, Sebastian Anders and David Sanchez; and her cousins' grandson, Daniel Tagle.        Memorials: In lieu of flowers, consideration of contributions to the St. Andrew's Catholic Church Building Fund or to the Parenting Center is suggested.        A native of San Antonio, Carmen Garza was born July 18, 1916, the daughter of Manuel and Maria Perez Garza. She married Lorenzo Lopez Galvez on Oct. 29, 1938. Mr. Galvez died in 2002.        After moving to Fort Worth in 1954, Carmen became a parishioner at St. Andrew's Catholic Church where she was a member of the Ladies Circle.        Survivors: In addition to her son, Albert, Carmen is survived by her daughters, Eloise Muga and her husband, Miguel, Maria Elena Galvez and Raquel Yarbrough; grandchildren, Mary Eleanor Anders, Christopher Yarbrough and Matthew Yarbrough; and seven great-grandchildren. Robertson Mueller Harper Funerals & Cremations 1500 Eighth Ave., 817-924-4233

The family of CARMEN GALVEZ created this Life Tributes page to make it easy to share your memories.