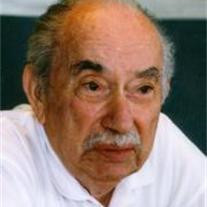 FORT WORTH -- Charles Etcoff, 87, a beloved husband, father and grandfather, died Wednesday, Oct. 11, 2006, at a local hospice. Funeral: 11 a.m. Friday in the sanctuary of Beth-El Congregation, 4901 Briarhaven Road. Rabbi Ralph Mecklenburger will officiate. Burial: Following committal prayers, Charles will be laid to rest in Greenwood Memorial Park. Bearers of his casket will be Bill Biggs, Ira Hollander, Steve Humble, Henry Luskey, Steve Small and Mike Stanley. Visitation: Mr. Etcoff's family will receive friends and sit Shiva at the residence of his daughter and her husband, Michele and Fred Reynolds. Memorials: In lieu of usual remembrances, his family suggests consideration of a contribution in Charles' name to Community Hospice of Texas, 6100 Western Place, Suite 500, Fort Worth, Texas 76116. Charles Etcoff was born Oct. 8, 1919, in Boston, Mass., the son of Louis and Fannie Pure Etcoff. He spent most of his life in Boston, where he graduated from English High School. After serving in Europe for five years in the U.S. Army during World War II, Charles married the former Bernice Cohen in 1948; the couple recently celebrated their 58th wedding anniversary. Very active in his local synagogue, Temple Beth Am, Charles taught Bar/Bat Mitzvah lessons, served on the religious committee and was a member of the Temple Brotherhood. He was both a religious and spiritual man who saw the miracles of God in every day. His faith in God and love for people showed in his charitable life. Charles was an avid fan of the Boston Red Sox, Boston Celtics and New England Patriots. He had a quit wit, a mild manner, a wonderful sense of humor and a love of children, animals and nature. Mr. Etcoff's family would like to thank Ms. Sissie Crayton and Community Hospice of Texas for their dedicated care and love. Survivors: Wife, Bernice Cohen Etcoff of Fort Worth; son, Lewis Etcoff and his wife, Marilyn, of Las Vegas, Nev.; daughter, Michele Etcoff Reynolds and her husband, Fred, of Fort Worth; granddaughters, Jennifer and Allison Etcoff and Lauren and Courtney Reynolds; and sister, Rhoda Oilshver of Randolph, Mass. Robertson Mueller Harper Funerals & Cremations 1500 Eighth Ave., 817-924-4233

The family of CHARLES ETCOFF created this Life Tributes page to make it easy to share your memories.