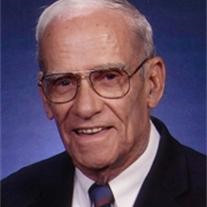 FORT WORTH -- Charles Wesley Pomeroy, 79, passed away Friday, July 4, 2008, at Baylor All Saints Medical Center after a brief struggle with cancer. Funeral: A memorial celebration of the Holy Eucharist will be held at 2 pm Wednesday, July 9, at St. John's Episcopal Church, 2301 College Avenue. Mr. Pomeroy's cremated remains will be interred in the church garth. Visitation: He will lie in state on Sunday afternoon in the Parlor at Robertson Mueller Harper; his family will receive friends in the Great Room from 3 to 5 p.m. Memorials: In lieu of flowers, consideration of contributions to VITAS Hospice or to a charity of one's choice, is suggested. Charles was born Aug. 7, 1928, in St. Louis, Mo., to Charles Bates and Roseanne Vance Pomeroy and grew up with his sister and four brothers. During World War II he worked as a shoe salesman and newspaper carrier. He graduated from St. Louis' Central High School, where had been elected homecoming king. A lifelong sports and Cardinals baseball fan, childhood neighborhood acquaintances included legends Joe Garagiola and Jack Buck. One of his greatest joys was passing along the love of baseball to his 8-year-old grandson, Sawyer, who he regularly took to Texas Rangers baseball games. After serving in the Navy, Charles enjoyed a 45-year career at the Frisco Railroad, which became the Burlington Northern Railroad, in the marketing and accounting departments. Known as Chuck to friends and family, he was active until the end of his life, serving as a volunteer with Baylor All Saints and Harris Methodist hospitals, as well as an original volunteer Ambassador at Dallas/Fort Worth International Airport. He was also a member of the TCU Frog Club. Survivors: Charles is survived by his wife, Nancy Fort Pomeroy; daughter, Dorothy Pomeroy Blackman and her husband, Mike; son, Gary Wesley Pomeroy; grandson, Sawyer Blackman; and several nieces and nephews. Robertson Mueller Harper Funerals & Cremations 1500 Eighth Ave., 817-924-4233

FORT WORTH -- Charles Wesley Pomeroy, 79, passed away Friday, July 4, 2008, at Baylor All Saints Medical Center after a brief struggle with cancer. Funeral: A memorial celebration of the Holy Eucharist will be held at 2 pm Wednesday, July 9,... View Obituary & Service Information

The family of CHARLES POMEROY created this Life Tributes page to make it easy to share your memories.