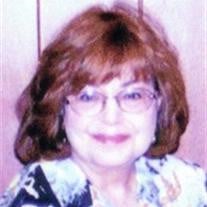 FORT WORTH -- Charlsa Sarvis Gudat Alphin Church, 64, died peacefully Wednesday afternoon, Jan. 2, 2008, at her residence. Funeral: 11 a.m. Friday in Kornbleet Memorial Cemetery Chapel, 411 N. University Drive. Rabbi Alberto Zeilicovich and Dr. Javier Smolarz, ritual director, will officiate. Following the chapel service, Charlsa will be laid to rest in Ahavath Sholom Cemetery. Bearers of her casket will be Gerade Telesko, Adam Sarvis, Alan Brooks, Michael DeLaCruz, Clay Roszell and Anthony DeLaCruz. Memorials: Consideration of contributions to the Cemetery Fund at Congregation Ahavath Sholom or a charity of one's choice, in Charlsa's name, is suggested. (As written by Charlsa) After a 16-year battle with heart disease and cancer, Charlsa either finished the job the Lord had for her or He gave her time off for good behavior. Although not always courageous she wanted to be remembered for a lot of laughter as well as tears. At this point she wanted to list her accomplishments but, in her own words, she was the "President of Nothing Important." She didn't belong to any prestige clubs, had not won any awards, but even better than those "things," she would leave behind many wonderful friends and family, those being the great things in life that we don't win but earn. Her treasures were her children, grandchildren, brother and dogs in whatever order the day held. Knowing her mother and Aunt Bea would be waiting for her, she spent many hours thinking up excuses for the many "why didn't you" questions. In addition to her parents, she was preceded in death by her daughter, Laura Gudat White, in 2007. A special thanks for all of the caring people at VITAS Hospice. Survivors: She leaves behind, hopefully far behind, her daughters, Carol Roszell and her husband, Clay, and Jill DeLaCruz and her husband, Michael; grandchildren, Gerade, Sam, Alan, Brianna, Charlsa, Franki, Anthony, Angelique and Aidan; her brother, Alan, and his children, Amy and Adam; caretakers, Gwendolyn Weathered and Shirley Johnson; and dogs, Pepper and Spotty. Robertson Mueller Harper Funerals & Cremations 1500 Eighth Ave., 817-924-4233

The family of CHARLSA ALPHIN CHURCH created this Life Tributes page to make it easy to share your memories.