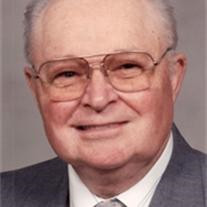 Father of former Keller Mayor Dave Phillips, "Charley", as he was known to his many friends, was the "Dancing King of the Keller Senior Center" and many other venues until he was 92. Often photographed in local publications dancing the evening or afternoon away with one of his dancing partners, he credited his long life to dancing, music and his daily participation at the Keller Senior Center. At age 92, health issues caused Charley to give up dancing and move to the Whitley Place Assisted Living Center in Keller, where he resided until November 1st of this year when he moved to a local group home for 24-hour nursing care. On Thanksgiving Day, after just undergoing hip surgery, Charley passed peacefully away. A Navy Veteran of WWII and Korea, Charley was most proud of his service on the aircraft carrier Saint Lo during the World War II battle of Leyte Gulf in the Philippine Islands of the Pacific. The St. Lo was the first American warship sunk by a Japanese Kamikaze plane which hit the ship carrying a 500 pound bomb on October 25th, 1944. The fleet lost 2 light carriers, 1 destroyer and 1 destroyer escort, and 894 service men. During this horrific event, Charley assisted many of his injured shipmates get off the sinking ship before it slipped below the waves thirty minutes after the first on-board explosion. Seaman Phillips finally slid down a fire hose into the ocean to eventually be rescued by other survivors on a rubber life raft, and subsequently by another Navy vessel. Charley believed that every day thereafter for the rest of his life was a gift to be savored and enjoyed. He went on to serve from 1950 through 1952 on a Navy troop transport during the Korean War. A lifelong Banker, Charles J. Phillips, his wife Marijane, son David and daughter Denise lived most of his life in Dearborn, Michigan until he moved to Texas in the early 70's to be near his son. Moving to Keller in 1994, Charley became "a regular" at the Senior Center, and at various community events. An avid baseball fan, and follower of the Rangers, and the Texas Aggie baseball and football teams, he always had a portable radio or a TV tuned to a game when he wasn't listening to Big Band music. He lived a full and long life. Charley is survived by his son Dave, his daughter-in-law Faith, his grandson Charles Scott Phillips, his granddaughter Tracey and her spouse  Paul Arguelles and their daughter Carolann , His granddaughter Dana Barrett, as well as various nieces, nephews and cousins throughout the country. Visitation and Funeral services will occur at the Lucas Funeral Home in Old Town Keller. Visitation will take place from 3-7PM on Thursday, December 3rd with the Funeral Service held in the Lucas Chapel Friday, December 4th at 11AM. Charley will be interred with honors at the DFW National Cemetery following the Funeral Service. Friends and family are welcome to attend. In lieu of flowers you may honor Charley's memory with a donation to the Community Storehouse in Keller at (817) 431-3340 or www.communitystorehouse.org.

Father of former Keller Mayor Dave Phillips, "Charley", as he was known to his many friends, was the "Dancing King of the Keller Senior Center" and many other venues until he was 92. Often photographed in local publications dancing the... View Obituary & Service Information

The family of Charles Phillips created this Life Tributes page to make it easy to share your memories.

Father of former Keller Mayor Dave Phillips, &quot;Charley&quot;, as he...