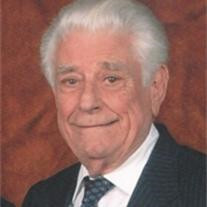 Fort Worth -- Charles Street was called home on Friday, May 20, 2011.        Funeral: 11 a.m. Tuesday at Zion Lutheran Church, 6416 Watauga Road. A graveside service will immediately follow funeral in Bluebonnet Hills Memorial Park. Visitation: The family will receive friends from 6 to 8 p.m. Monday at the funeral home.        Charles was born in Hill County on Oct. 12, 1924. He proudly served his country as a sailor in the U.S. Navy aboard the USS Monrovia during World War II. Charles married his wife of 60 years, Marine Radle, on March 3, 1951. He worked many years on the assembly lines at General Dynamics, LTV, and retired from Bell Helicopter.        Charles loved his family and was a man of strong faith. He loved Christmas and was known to begin decorating his home with hundreds of lights as early as October in giddy anticipation. A gregarious man who enjoyed nothing more than the company of others, he will be well-remembered by all who knew him.        Survivors: Charles is survived by his wife, Marine; son and daughter-in-law, Charles W. and Cindy Street; daughter and son-in-law, Peggy and David McKinney; son, Dennis Street; grandchildren, Stephen Street and his wife, Rebecca, Kyle McKinney and his fiancee, Jordanna, Stacey Street, and Heather Hubbard and her husband, Eric; and great-grandchildren, Parker and Presley

The family of Charles Street created this Life Tributes page to make it easy to share your memories.