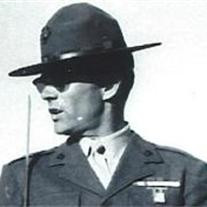 RICHLAND HILLS -- Clarence W. Connell, 77, a retired U.S. Marine and U.S. Postal Service employee, went to be with the Lord on Wednesday, March 14, 2007, at his home after a brief but valiant battle with complications from a stroke. Graveside service: 1 p.m. Monday in D-FW National Cemetery, Dallas. Visitation: (viewing) 2 to 5 p.m. Sunday at Lucas Funeral Home in Hurst. Born Nov. 26, 1929, in Healdton, Okla., Clarence spent many of his childhood years in the Whitney-Hillsboro area as well as Denison. Clarence enlisted in the U.S. Navy in 1947 and served in the Navy until 1950. After a brief separation from military service, Clarence joined the United States Marine Corps. During his 17 years with the Marine Corps, he was a "heavy junk" engineer, a drill instructor and, finally, a recruiter. Clarence retired in May 1968 and was a veteran of the Korean and Vietnam wars. Clarence was a member of the VFW, American Legion and Marine Corps League. Of greater importance, Clarence was a loving, devoted and giving husband, father, friend and neighbor. The family would like to thank all of Clarence's friends who have shown us all so much support over the months and years: his Marine Corps family, the staff and fellow patients at Fort Worth Dialysis on Sandy Lane, Community Hospice and all of the many others who have been his and our angels. Survivors: His wife and companion of 49 years, Janis; his children, Andrea and her husband, Jim of Avondale, Pa., Scott of Mendota Heights, Minn. and Laura of Fort Worth; grandchildren, Josh, Jill and her husband, Mike; great-grandchildren, Tyler, Jake, Mallory and Alyssa. Clarence also leaves behind his beloved pet, Shamrock. Clarence will also be greatly missed by his neighbors and second family, the Powell family, Richard, Donna, Justin, Jennifer and Emily.

RICHLAND HILLS -- Clarence W. Connell, 77, a retired U.S. Marine and U.S. Postal Service employee, went to be with the Lord on Wednesday, March 14, 2007, at his home after a brief but valiant battle with complications from a stroke.  Graveside... View Obituary & Service Information

The family of Clarence Connell created this Life Tributes page to make it easy to share your memories.