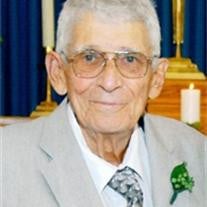 BEDFORD -- Clarence Anderson Mokaren, 87, passed away Wednesday, May 6, 2009, at a local care facility. Service: 2 p.m. Sunday at Lucas Hurst Funeral Home, 1321 Precinct Line Road, conducted by the Hurst Masonic Lodge of Free and Accepted Masons #1387. Inurnment: at a later date in Dallas-Fort Worth National Cemetery. Visitation: The family will receive friends at 1 p.m. Sunday. Memorials: The family respectfully invites donations be made in his name to the Leukemia & Lymphoma Society or the American Cancer Society. Clarence Anderson "Mo" Mokaren was born April 18, 1922, in Cleveland, Ohio, to Faiz and Eleanor Anderson Mokarem. Mo served in World War II in the Battle of the Bulge. He later worked for Ford Motor Co., starting at the Cleveland engine plant before promotion/transfer to plant manager of Ford Aluminum Casting Plant in Sheffield, Ala., and the Rouge Foundry in Detroit, Mich., in his 30-year career. Mo was a 32nd-degree Mason, member of the Holyrood Commandery and was past worthy patron, Order of the Eastern Star in Ohio. He was active in youth programs such as Junior Achievement and Boy Scouts. He was honored by the Scouts with the Silver Beaver Award for his work. He enjoyed traveling, golf, family and friends. Mo will always be remembered for his outgoing personality and wonderful sense of humor. Survivors: His wife of 67 years, Margaret; sons, Dennis Mokaren and his wife, Liz, Dale Mokaren and his wife, Kathy, and Doug Mokaren and his wife, Emily; grandchildren, Marissa Mokaren, David Mokaren and friend, Kristin Masek, Deanna Mokaren, Debra Kellar and her husband, Ben, Bill Morgan and his wife, Cathey, and Teresa Cain; and five great-grandchildren.

The family of Clarence Mokaren created this Life Tributes page to make it easy to share your memories.