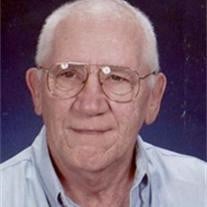 MANSFIELD -- Clifford Edwin "Kip" Lewis Sr. passed from this earth on June 10, 2008, at Huguley Hospice in Burleson. Memorials: In lieu of flowers, Kip has asked that donations be made to The Wish to Fish Foundation. He was born March 19,... View Obituary & Service Information

The family of Clifford Lewis created this Life Tributes page to make it easy to share your memories.