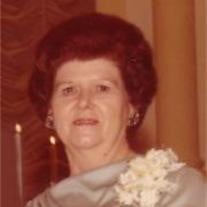 FORT WORTH -- Darlene Elizabeth Bryant Gosnell, 88, a loving mother and grandmother, died peacefully Monday morning, Aug. 27, 2007. Funeral: 7 p.m. Friday in the chapel of Robertson Mueller Harper. A service at the grave will be held at 2 p.m. Saturday in the Frederick Memorial Cemetery, Frederick, Okla. Visitation: Mrs. Gosnell will lie in state on Friday at Robertson Mueller Harper; her family will receive friends from 6 to 7 p.m. Memorials: Consideration of contributions to the Handbell Fund at Agape Baptist Church, 3954 Southwest Blvd., Fort Worth, Texas 76116, or to a charity of one's choice, in memory of Darlene, is suggested. A native of Durant, Okla., Darlene Elizabeth was born March 22, 1919, the daughter of Henry Keys and Mary Miller Bryant. Her family moved to San Angelo while she was still a baby, where she grew up on a cotton farm with a brother, three sisters and two stepbrothers. Darlene met her husband, Johnnie Gosnell, when he returned from serving in the U.S. Army during World War II. They were married Oct. 15, 1946, at the First Baptist Church of San Angelo. In 1960, Johnnie, Darlene and their daughter, Shellie, moved to Fort Worth. The family became members of Ridglea Baptist Church, where Darlene made friends quickly. Darlene was a very crafty person. She often used her creative talents in decorating, entertaining and sewing. After retiring, Johnnie and Darlene moved back to San Angelo. Mr. Gosnell died in 1984. In addition to her husband, she was preceded in death by her parents, brother and three sisters. Survivors: Her devoted daughter, Shellie Fairless and her husband, Randall; her adoring grandchildren, Melissa, Bryan and Chelsea Fairless; and several nieces and nephews. Robertson Mueller Harper Funerals & Cremations 1500 Eighth Ave., 817-924-4233

FORT WORTH -- Darlene Elizabeth Bryant Gosnell, 88, a loving mother and grandmother, died peacefully Monday morning, Aug. 27, 2007. Funeral: 7 p.m. Friday in the chapel of Robertson Mueller Harper. A service at the grave will be held at 2 p.m.... View Obituary & Service Information

The family of DARLENE GOSNELL created this Life Tributes page to make it easy to share your memories.