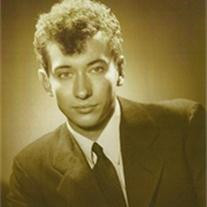 SOUTHLAKE -- Daniel John Hlodnicki - Born 10/18/1925 died peacefully 9/18/2011 surrounded by his loving family and friends. He had his wit and good humor until the very end, as was his wish. After his wife passed away nearly 20 years ago, Dan became a traveling Father, Grandfather, Pet Sitter, Gardener, Trench digger, Artist, Craftsman, Handyman, treasured friend and companion. He shared is life with each one of his children, Bruce, Jill and Brad and their families as we shared our lives with him. He was full of life and loved all the things he accomplished in the nearly 86 years he was on this earth.        Dan was born in Gary, Indiana to parents Josef and Rose Hlodnicki. He was the youngest of their 7 children. His formative years were in the heart of the Great Depression. This and his parents taught him his incredible work ethic. He attended Lew Wallace high school and graduated in 1943. During that time he was the head football manager for 3 years, played freshman basketball, ran 4 years of varsity track and was the cartoonist and business manager for the school newspaper the "Philosopher".        He enlisted in the Army Air Corp and was sworn in at Fort Thomas Kentucky on Oct 18, 1943, his 18th birthday. During his 2 years in World War 2 he served in North Africa, China, India and Burma. After the war he was honorably discharged from the Army on Christmas day 1945.        He enrolled at Indiana University in 1946 and majored in Psychology with a minor in Personnel Management. He was a member of Sigma Pi Fraternity and the Falcon club.        Dan married Florence "Eloise" Bacon on 10/10/53. He raised his family in Crown Point, In. He was an incredibly hard working, bright and caring man who sacrificed greatly for the welfare of his family.        He is survived by his three children Dr. Bruce Hlodnicki, Jill Toering, Brad Hlodnicki as well as grandchildren Amanda and Jack Mooney, son-in-law Norm Toering, daughter-in-law Terri Hlodnicki, son-in-law Tim Britton, sister Cornelia (Corky) Hlodnicki and daughter by choice Jacquelyn Ryan.        A private memorial was held for the family. In lieu of flowers, please plant a tree in his memory or donations can be made to the Arbor Day Foundation.        www.arborday.org

SOUTHLAKE -- Daniel John Hlodnicki - Born 10/18/1925 died peacefully 9/18/2011 surrounded by his loving family and friends. He had his wit and good humor until the very end, as was his wish. After his wife passed away nearly 20 years ago,... View Obituary & Service Information

The family of Daniel Hlodnicki created this Life Tributes page to make it easy to share your memories.