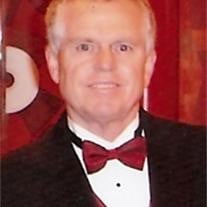 David William Harris of Keller, Texas, died Sunday May 2, 2010, at the Baylor Medical Center in Grapevine, Texas after suffering from a cardiac arrest on April 20, 2010. Dave is survived by his wife, Colleen; his children, Brian and DJ; his grandchildren, Trenton, Dylan, and Lexi; sister Joan Blodgett and extended Family. Service: May 5 at 11:00 AM at St. Elizabeth Ann Seaton Catholic Church, 2016 Willis Ln in Keller, Father Isaac Orozco Celebrant. Bearers of Dave's casket will be Carl Dumesnil, Tony McCoy, Peter Modest, Bill Carr, Bob Stepp, Greg Nichols, Jimmy Phillips and Bill Masters. Dave will Lie in State at the Lucas Funeral Home Chapel, 137 E Hill St in Keller May 4 from 12 noon until 8:00 PM. The family will receive friends from 6:00 - 8:00 PM with the "Recitation of the Holy Rosary" at 7:00 PM. Dave began his journey on February 24, 1946, when he was born in Addison Michigan to Jane and Kenneth Harris. Dave and his big sister, Joan (Blodgett), grew up in Cement City, Michigan. Dave obtained an undergraduate degree from Western Michigan University, and a master's degree from Eastern Michigan University. During the 1970's, Dave was a teacher with the Columbia School District in Brooklyn, Michigan. Dave married Freida Dermyer, and fathered two boys, Brian and DJ. They moved to Fort Collins, Colorado where he and Freida eventually divorced. Dave later met Colleen Parr, and they were married on May 28, 1989. Dave's career with Truswal eventually brought Dave and Colleen to Texas. Dave retired in 2006. The Circle H Ranch in Keller, Texas is where Dave called home. His "ranch" consisted of numerous misfit pets, which included rescued dogs, cats, miniature donkeys, miniature goats, and even "fainting goats." Dave loved to spend time with his grandchildren, Trenton (8), Dylan (6), and Lexi (4), his animals, and his friends and family. Since his retirement, Dave enjoyed his time traveling around the world with Colleen, being active in his church, sailing, and riding his Harley Davidson motorcycle. Dave was a wonderful friend, brother, father, grandfather, and husband. He has brought instant joy to those who knew him.

David William Harris of Keller, Texas, died Sunday May 2, 2010, at the Baylor Medical Center in Grapevine, Texas after suffering from a cardiac arrest on April 20, 2010. Dave is survived by his wife, Colleen; his children, Brian and DJ;... View Obituary & Service Information

The family of David Harris created this Life Tributes page to make it easy to share your memories.