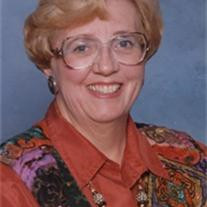 Dianne "Boots" Cloutier Anderson, our beloved Wife and Mother, passed into the loving arms of the Lord Thursday, Jan. 19, 2012. Memorial service: 11 a.m. Monday at Calvary Lutheran Church, 7602 Baker Boulevard, Richland Hills. Visitation: The family will receive friends 2 to 5 p.m. Sunday at Lucas Funeral Home in Hurst. Boots was born to Arendt Jasper Cloutier and Alva Dugstad Caroline on March 27, 1935, in Rochester, Minn. She was a loving mother to four and Nana to five grandchildren. She was a drum majorette and soloist at her church in high school. She married Roger Anderson, her sweetheart at Denfeld High, in Duluth in 1957 and enjoyed 55 years of family life traveling the world. They moved their family from Two Harbors near Duluth to White Bear Lake in 1961, after the birth of their first two children, Pam and Doug. Daughter Linda was born in White Bear Lake near St. Paul where they spent four years. Boots moved to Denver in 1964. The year 1966 brought a new richness to her life with the birth of daughter Julie. Boots also loved being close to her Aunt Fritzi and Fritzi's three kids who were literally just around the corner. In 1969 a move to Southern California brought the formation of many new friendships with the Griffins, Sharrs and many others that would endure the rest of her life. In 1972 she left SoCal for San Jose in Northern California where she continued to have an enormous impact on a new group of friends in the Montevideo neighborhood, where her kids attended church and school. The annual neighborhood Fourth of July parades were a family favorite. In 1977 came a new posting to The Old Dump Road in Hudson, Wis., so she wouldn't forget how to drive in the snow. She spent four years refining that skill and visiting frequently with in-laws, the Swensons, across the river in Minnesota. In January of 1981 came the first overseas adventure, when Boots and Rog and Julie moved to Brussels, Belgium. Boots loved the many varieties of chocolate, and afternoons on the Square with a glass of wine. She hosted her other three kids for a six-week European tour that visited the Von Trapp Family home in Switzerland and included a New Year's Eve celebration with the family in Paris that December. She and Rog spent many a weekend exploring that part of the world, including visiting cousins in Sweden, until 1985. Upon her return to the U.S. she moved to Fort Worth, where she was active as a buyer for the gift shop at a local hospital (since closed) here in Tarrant County. During her 29 years in Texas, she developed a new network of close friends while still maintaining close ties with all the folks she had influenced during her travels. She was active in her churches and joined the square dance group, the Happy Hoofers, who kept her hopping learning new dance steps! Boots and Rog continued to travel often, and an eight-day vacation to the British Virgin Isles with the Jacksons was a highlight for them both. Her final years were spent with her card club, book club, and church groups. Dianne had the true gift of hospitality: she loved to cook, entertain and help others experience community and love. She wrote her own cookbook and nourished all of us in body, mind and soul. Survivors: Husband, Roger Anderson; son, Douglas Anderson and wife, Linda; daughters, Pam Anderson Otto and husband, Bruce, Linda Anderson Little and husband, Dan, Julie Anderson Emmett and husband, Larry; mother, Alva Cloutier; brothers, Thomas Cloutier and wife, Sandy, John Cloutier and wife, Peggy; grandchildren, Brendon Otto, Chris Otto, Daniel Anderson-Little, Jacob Anderson-Little and Leah Anderson Little; and aunt, Fritzi Shonk. She also is survived by a host of loving nieces, nephews, other extended family members, and lifelong friends.

The family of Dianne Anderson created this Life Tributes page to make it easy to share your memories.