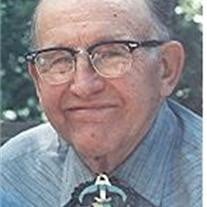 Celebration of life: His family will celebrate his life at 6 p.m. Thursday, June 21, at Lucas Funeral Home on North Sylvania. Mr. Lochtrog donated his body to science, so there will be no burial. Don was born Sept. 3, 1918, in Junction City, Kan., and grew up in Ogden, Utah. Don attended Weber College in Ogden and the University of Colorado at Boulder studying for a chemical engineering degree. While visiting family and friends in San Diego, he was employed by Consolidated-Vultee Aircraft Corp. as an aeronautical draftsman. In 1940, he transferred to the Fort Worth plant, where he met his wife, Jean Marie Albrecht, and asked her for a date on her last day of work at Consolidated (which he always called "the luckiest day of my life"). A veteran of the U.S. Army and World War II, he was wounded in Belgium for which he was awarded the Purple Heart. Don completed his tour of duty with the Army of Occupation in Germany. With self-confidence and always looking for a good deal, he spent much of his spare time managing his rental property retirement program always including time for church, family vacations, swim outings and cookouts at Barrbrook Park. Don was always delivering a home smoked chicken to friends and family. Don was a member of First Christian Church of Fort Worth and before that, First Presbyterian Church in Ogden, Utah. Don was also a 60-year Mason, a member of the Moslah Shrine Temple, the Fort Worth Model A Club and the Fort Worth Junior Chamber of Commerce. Since 1978, his summers were spent with his wife at their mountain cabin on Vallecito Lake in Colorado. Don never met a stranger and loved telling a good joke. He enjoyed fishing, scary jeep sightseeing rides and sitting on their deck cooking s'mores in the fire pit through his last trip in 2006. Don's parents were Frederick Joseph Lochtrog and Lily Kummer Lochtrog; he was born on his sister's 10th birthday. Don was preceded in death by his parents; sister, Gladys Lochtrog Hall; his infant son; and infant daughter. Survivors: His wife; their daughters, Debra Lochtrog of Fort Worth and Diane Lochtrog Johnson and husband, Gary Johnson of Benbrook; grandchildren, Laura Rollins Crews and husband, James, Lily Rollins and Jeoffrey Adam Johnson; and great-grandchildren, Karen Crews, Kyle Crews and Ashley Crews. Memorials: First Christian Church Fort Worth - Archives, building or choir memorial funds, 612 Throckmorton, Fort Worth, Texas 76102; Vitas Innovative Hospice Care Fort Worth, 2501 Parkview Drive, Suite 600, Fort Worth, Texas 76102; or Arthritis Foundation.

Celebration of life: His family will celebrate his life at 6 p.m. Thursday, June 21, at Lucas Funeral Home on North Sylvania. Mr. Lochtrog donated his body to science, so there will be no burial. Don was born Sept. 3, 1918, in Junction City,... View Obituary & Service Information

The family of Donald Lochtrog created this Life Tributes page to make it easy to share your memories.

Celebration of life: His family will celebrate his life at 6...