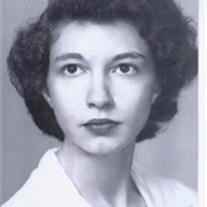 ARLINGTON -- Dorothy May Leach, 79, passed away peacefully Monday, June 2, 2008, at her home in Arlington. Memorials: Donations may be made to the performing arts organization of donor's choice. She was born Dorothy May Stinson on April 9, 1929, in Washington, D.C. A self-proclaimed "Navy brat," Dorothy spent her childhood traveling and living in numerous cities throughout the United States. She attended Wellesley College in Boston, Mass., before moving to Houston, where she earned her bachelor's and master's degrees from the University of Houston. At the university she met William Judson Leach and the two were married in December 1949. She and her family were members of Trinity Episcopal Church. Dorothy's professional career spanned 25 years with the Houston Independent School District, beginning at George Washington Junior High and ending at The High School for the Performing and Visual Arts. She took advantage of her position as teacher and mentor to broaden young minds and impart her abiding passion for knowledge. The lifelong friendships she formed with many of her students stand as testament to her accomplishments in the classroom, and her absence will be keenly felt by all who knew her. For those of us left behind, grieve not, but let us cherish our memories of this remarkable woman. Dorothy was preceded in death by William Judson Leach; her youngest son, William Judson Leach Jr.; and her parents, Peery Lamar and Dorothy Baptista Stinson. Survivors: Her son and daughter-in-law, Richard Stinson Leach and Josie Lynn Leach of Arlington; grandson, Christopher Michael Roubieu and his wife, Sarah Grogan Roubieu of Austin; sister, Antoinette Stinson Carter of Houston; nieces, Carole Carter Kleiber and Catherine Carter Stubbs of Houston; and her beloved caregiver, Peggy Louisa Harris of Arlington.

ARLINGTON -- Dorothy May Leach, 79, passed away peacefully Monday, June 2, 2008, at her home in Arlington. Memorials: Donations may be made to the performing arts organization of donor's choice. She was born Dorothy May Stinson on April 9, 1929,... View Obituary & Service Information

The family of Dorothy Leach created this Life Tributes page to make it easy to share your memories.