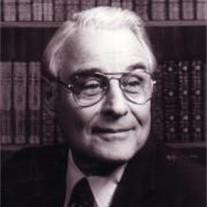 FORT WORTH -- Edwin Simon Wittenberg, 87, a beloved husband and father, died peacefully Monday morning, July 9, 2007, after a long and happy life. Funeral: 11 a.m. Friday in the sanctuary of Beth-El Congregation, 4901 Briarhaven Road. Rabbi Charlie Cytron-Walker of Congregation Beth Israel in Colleyville will officiate. Burial: Following committal prayers, Ed will be laid to rest in the Beth-El Section of Greenwood Memorial Park. Visitation: He will lie in state Thursday in the Parlor at Robertson Mueller Harper; his family will receive friends 6 to 7 p.m. in the Great Room. Memorials: Consideration of contributions to Beth-El Congregation or a charity of one's choice, in memory of Ed, is suggested. Ed Wittenberg grew up in Lincoln, Neb., and as a senior in high school was president of the National Honor Society. Ed then continued his education as a Cornhusker at the University of Nebraska, where he earned an AB in journalism and was news editor of the university newspaper and business manager of the monthly university magazine. During World War II, Ed served as a B-17 bombardier with the Army Air Corps in the North African theater, where he completed 51 missions and was awarded the Air Medal with nine bronze clusters. In 1945, Ed married Pauline Landman, a native of Fort Worth, where they settled for what would be 62 years of a happy and loving marriage. Ed's post war career began in the hardware and sporting goods business where he was president and general manager of A.J. Anderson & Co. for 18 years. In 1964, Ed changed professions when he joined The Mutual Life Insurance Co. of New York as an agent, where he continued until retirement in 2002. Ed quickly earned top career credentials by studying for and passing the necessary exams to become both a chartered life underwriter as well a chartered financial consultant. While with MONY, Ed received many honors. He qualified for the MONY Honor Club, as well as MONY's Top Fifty and President's Council. Eds lifetime achievements with MONY included earning his rank as a life and qualifying member of the Million Dollar Round Table and Texas Leader's Table. Ed enjoyed being a mentor and was an inspiration to many new life insurance agents. He received his highest local honor when the Fort Worth MONY agency created the Ed Wittenberg Rookie of the Year Award, which honors an agent in his or her first year for best all-round performance. Ed achieved his highest company honors with MONY when he was elected to MONY's Hall of Fame, which included recognition of Ed at the MONY corporate offices in New York City where his photograph is featured. Ed was dedicated to preserving and improving the quality of his profession and served as president of the Fort Worth Association of Life Underwriters, the Fort Worth Chapter of Chartered Life Underwriters and the Fort Worth Chapter of Chartered Financial Consultants. He actively participated in the life and improvement of the local community as well. Ed and his wife, Pauline, have been members of Congregation Beth El for over 60 years, where he served as a member of the board and treasurer. Ed was a founding director of the Downtown Fort Worth Association and was a member of Rotary International for 51 years. He served as vice president of the Child Guidance Clinic (now the Child Study Center), vice president of the Fort Worth Anglers Club and vice president of the Junior Amateur Baseball Association. He was a board member of the Camp Fire Girls, coached his son's baseball team and was a member of the advisory council for the League of Women Voters. Ed also served in a number of United Way campaigns and as a member of the allocations subcommittee. When his children were young, Ed was active in the PTA, serving on numerous boards and as treasurer. Ed was active in the National Conference of Christians and Jews, and supported the Arts Council of Fort Worth and the Fort Worth Opera. Ed enjoyed playing golf as a member of Colonial Country Club and dancing with his wife as a member of the Fort Worth Petroleum Club. Ed and his wife, Pauline, enjoyed extensive international travel throughout the world during their life together. Survivors: Wife, Pauline Landman Wittenberg of Fort Worth; daughter, Gail Wittenberg of Santa Fe, N.M.; and son, Alan L. Wittenberg of Dallas, an attorney. Robertson Mueller Harper Funerals & Cremations 1500 Eighth Ave., 817-924-4233

The family of EDWIN WITTENBERG created this Life Tributes page to make it easy to share your memories.

FORT WORTH -- Edwin Simon Wittenberg, 87, a beloved husband and...