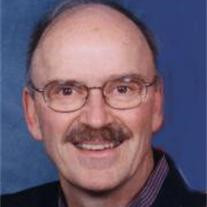 FORT WORTH -- Eric Robert Anderson, 65, passed away peacefully on Friday, Oct. 26, 2007, at home surrounded by his family after a long, courageous fight against multiple myeloma. Memorial service: A service celebrating Eric's life will be held at 4 p.m. Tuesday in the sanctuary of the First Presbyterian Church of Fort Worth, 1000 Penn St. His family will greet friends in the church narthex immediately afterwards. Memorials: In lieu of flowers, consideration of contributions to the International Myeloma Foundation, http://myeloma.org., in Eric's memory, is suggested. Eric was born on June 30, 1942, in Huntington, N.Y. He earned undergraduate and graduate degrees in geology from Virginia Polytechnic Institute and State University. While at Virginia Tech, Eric served in the Corps of Cadets, ROTC and was a smooth saxophonist in a jazz band, The Southern Colonels. After completing his undergraduate degree, Eric was commissioned as a second lieutenant and served his country in Vietnam for a 13-month tour in the U.S. Army Corps of Engineers. Following his tour of duty, Eric was discharged as a captain and upon returning home, completed his education. In 1968, Eric and his new bride, Sue, left the East Coast for Midland, to begin his distinguished career as a petroleum geologist for Shell Oil Company. After nearly 40 years as a geologist for several different companies, which included many successes, a few disappointments, and many friends along the way, he retired from XTO Energy in September 2007. Eric had many interests, including fly-fishing, travel, lapidary and collecting mineral specimens, but his greatest passion was being a devoted husband, father and grandfather. He was preceded in death by his parents, Carl and Elsa Anderson. Survivors: His loving wife of 39 years, Sue Anderson of Fort Worth; his children, Kristofer Anderson and his wife, Monica of Flower Mound and Maren Anderson Gibbs and her husband, Charlie of Fort Worth; his granddaughters, Alex and Nola Gibbs and Emily and Ella Anderson; and his brothers, Alan Anderson of Bel Air, Md. and Lance Anderson of Spring. Robertson Mueller Harper Funerals & Cremations 1500 Eighth Ave., 817-924-4233

FORT WORTH -- Eric Robert Anderson, 65, passed away peacefully on Friday, Oct. 26, 2007, at home surrounded by his family after a long, courageous fight against multiple myeloma. Memorial service: A service celebrating Eric's life will be held... View Obituary & Service Information

The family of ERIC ANDERSON created this Life Tributes page to make it easy to share your memories.