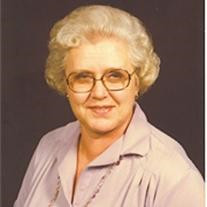 RICHLAND HILLS -- Faye Mize, 80, passed away peacefully on Saturday, March 29, 2008. Funeral: 2 p.m. Tuesday, Lucas Funeral Home. Burial: Bluebonnet Hills. Visitation: 5 to 7 p.m. Monday. Edna Faye Walkup was born on Nov. 13, 1927, in Paducah to Ed and Nettie Walkup. She was raised in Childress and in 1962 moved to Richland Hills. She joined Richland Hills Baptist Church, faithfully teaching Sunday school and singing in the choir. She was a single mother who was devoted to her three children. Faye worked in the Tarrant County tax office and later for the city of Fort Worth. Faye will be missed by many friends and family members. She was a devoted Christian whose life should be an example to everyone. The family thanks the staff of Good Place Assisted Living, Southlake Oncology and Seasons Hospice Services for their care. Faye was preceded in death by her parents; her brother, Lloyd Walkup; and her son, Randy. Survivors: Son, David, and his wife, Julie of Haltom City; daughter, Cindy, and her husband, Charles of North Richland Hills; grandchildren, Stephen Street and his wife, Rebecca, Stacey Street, Matthew Dutton and Aaron Dutton; brothers, George Walkup and his wife, Joan of Childress and Troy Walkup of Dallas; and numerous nieces, nephews and cousins.

The family of Edna Mize created this Life Tributes page to make it easy to share your memories.