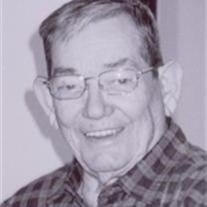 MANSFIELD -- Edward Scaff, 84, died Friday, March 6, 2009, in Mansfield.        Memorials: In lieu of flowers, please make donations to SPJST Lodge 92 (building fund), 3316 Roberts Cut-Off Road, Fort Worth, Texas 76114; or the Salvation Army.        Ed was born July 18, 1924, in Thurber to the late Alvin G. Scaff and Ina M. Phipps Scaff. In 1925 the family moved to Dallas, where Ed attended Lida Hooe Elementary School and graduated from Sunset High School. Following high school Ed spent three years and 13 days in the Navy. After serving his country during World War II Ed gained employment with American Airlines-a career that spanned 34 years in the Dallas-Fort Worth area. He met Evelyn Kubala on a blind date in 1948. They were married later that year. Together they had six children and spent most of that time in Grapevine.        Ed was an active member at St. Francis Catholic Church of Grapevine. He retired from American Airlines in 1980 and moved to Burnet County. During his retirement years Ed worked as a volunteer fireman/EMS and was a member of AARP, a volunteer driver for Meals on Wheels and designated a "Master Gardener" by Burnet County Fair. Throughout his life Ed enjoyed fishing and gardening. In later years he enjoyed playing slot machines. He was known to all as an excellent card player in bridge and tarok.        He was preceded in death by his parents and four of his five brothers, Alvin, Vernon, Ray and James Scaff.        Survivors: His wife of 60 years, Evelyn; children and grandchildren, son, Bradley Scaff and wife, Jane, grandchildren, Sam, Joe and wife, Mandy, Erika and her children, Angela, Shatoria and Caleb, Jennifer and Pat Totman with their new baby, Claire, daughter, Gayle Scaff Krengel and her husband, Guenter, and their daughter, Kristina and her husband, Robert McAmis, son, Bruce Scaff and wife, Rosie, and their sons, Stuart, Alec and Jordan, Brian Scaff and wife, Maggie, and their children, Foster and Connally, Katrina Scaff May and husband, Carl, and children, Karen and Andrew, Brent Scaff and wife, Kristin, and children, Hayden and Hannah; brother, Lloyd Scaff and wife, Beverly, of California.

The family of Edward Scaff created this Life Tributes page to make it easy to share your memories.