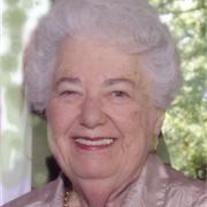 FORT WORTH -- Fay Rosenthal Brachman, 86, a loving wife, mother, grandmother and great-grandmother, died peacefully Sunday morning, Nov. 18, 2007, at home surrounded by her family. Funeral: 10 a.m. Tuesday in the Barnett Sanctuary of Congregation Ahavath Sholom, 4050 S. Hulen St. Rabbi Alberto "Baruch" Zeilicovich will officiate. Following committal prayers, Fay will be laid to rest next to her daughter, Ellen, in Ahavath Sholom Cemetery, 411 N. University Drive. Bearers of her casket will be her grandsons, Ellis Brachman, Mark Rice and Todd Rice and nephews, Joel Rosenthal, Stephen Rosenthal, Eliot Barnett, Lon Werner and Howard Bernstein. Minyan services will be held at the residence beginning at 6 p.m. Tuesday and will continue on Wednesday and Thursday evenings. Memorials: For religious reasons, the family requests that no flowers be sent. Consideration of contributions to Congregation Ahavath Sholom, the Texas Jewish Historical Society or to a charity of one's choice, in Fay's memory, is suggested. Fay was a lifelong resident of Fort Worth, born June 21, 1921, the daughter of Harry and Jennie Levenson Rosenthal. In the "olden days" of Fort Worth, her mother used to walk barefooted downtown to her grandfather's dry goods store by the courthouse. Her father once got a ticket herding too many cows down the main street of downtown Dallas. Fay and her husband, Leon Harold Brachman, were among the founders of the Fort Worth Symphony and the Van Cliburn International Competition. Together, they were always involved in the music world of Fort Worth and Fay could always be seen at local musical events making friends with everyone there. As a volunteer, she was the first woman president of the Texas Jewish Historical Society. During her presidency, Fay increased the membership five-fold. Even after her presidency, she took pride in continuing to assist the organization enhance its membership. As the former president of the Ahavath Sholom Ladies Auxiliary, Fay founded and was the originator of its gift shop. She became a travel agent and ran her own agency for many years, specializing in customized trip agendas. On her many trips to exotic locations around the world, she would take time out to find items that could be unique additions to the gift shop offerings. Additionally, she served as the Westcliff Candy Campaign chair for Camp Fire Girls for many years and was one of the founders of the Bluebonnet Elementary School PTA. Her grandfather, Ben Levenson, was one of the 10 men who founded Congregation Ahavath Sholom in 1892 and had served as the second president of the synagogue. This infused her with a deep feeling of responsibility to preserve Jewish history. As part of this effort, she spent many years organizing and administrating the Fort Worth Jewish Federation Historical Archives. With an inveterate penchant for knitting, Fay equipped three whole generations of friends and relatives with mittens, caps and gloves. She was particularly proud to have specialized in knitting baby booties for anyone she knew who was having a baby. When her husband established a manufacturing plant in Haiti, Fay befriended the leader of a local convent, which produced custom handmade linens. Her interest in Sister Maria Pia became legendary as she helped the sister to travel the country and Texas to show and sell her special linens. This business allowed poor girls in Haiti to learn a trade. She was very proud of this. Fay was married to the love of her life for over 66 years. Legend has it that they met near a golf course when her soon-to-be husband's ball went astray and landed nearby. She challenged him to improve his golf game and instead they got married. She came from a large family. At one time her family's "Cousins Club" consisted of over 120 relatives. Her house was always open to anyone coming into town and she loved having a house full of people. Every person who knew her was her friend. Survivors: Her husband, Leon H. Brachman of Fort Worth; daughters, Debby Brachman Rice of Fort Worth, and Wendy Brachman Fisher and her husband, Warren, of Efrat, Israel; son, Marshall Brachman of Washington, D.C.; grandchildren, Mark Rice and his wife, Ellen, of Glencoe, Ill., Todd Rice of Miami, Fla., Amy Brachman of Richmond, Va., Ellis Brachman and his wife, Kedrin, of Washington, D.C., Sarah Brachman of Frankfort, Ky., and Ma'ayan Fisher, Elad Fisher, Eliraz Fisher and Bezalel Fisher of Efrat, Israel; and great-grandchildren, Max Rice, Nathan Rice, Miles Rice and Sabrina Rice of Glencoe, Ill. Robertson Mueller Harper Funerals & Cremations 1500 Eighth Ave., 817-924-4233

The family of FAY BRACHMAN created this Life Tributes page to make it easy to share your memories.