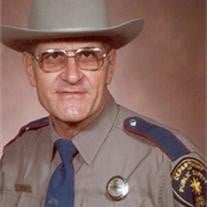 Frank Smith was born March 10, 1929, in Dallas. At age 15, he entered the Merchant Marines and served with the Seaborne Army Transport Service during World War II. He married his high school sweetheart, Patsy Grubbs, and they have been married 59 years. Together they raised five children. Frank joined the Texas Department of Public Safety and worked as a highway patrolman and motor vehicle inspector for 34 years. Frank was also a member of the special Texas Rangers. After retiring from the DPS in 1982, one week later, he went to work for First Baptist Church in downtown Dallas as a security guard, under the direction of his longtime friend and colleague, Bill Caffee, who passed away three years ago. Frank served at the church for 18 years until his Parkinson's disease forced him to leave. Frank was a very busy man. He also served faithfully in the Texas National Guard for 35 years, earning numerous awards, medals and accolades. During his decades of loyal service to his country and law enforcement, he was determined to achieve a college degree and proudly graduated from Texas Christian University in 1976 at age 46, achieving a bachelor's degree in criminology. Frank Smith loved the Lord and it showed. His generosity is still felt by many. He was a loving father and devoted husband. He was a man with honorable character and impeccable values. He had been a member of the Masonic Lodge in Jacksboro since 1953. He is still remembered by some as always paying his dues on time. On those very rare and special times that Frank took off from his busy schedule, he loved to snow ski, water ski and vacation in Hawaii. Frank had a very dry sense of humor and an infectious laugh. He was well liked in all areas of his life. He loved to laugh. Goodbye, dear friend and faithful servant. We will miss you terribly.Survivors: Wife, Patsy; children, Deborah Sue Smith, Carolyn Annette Valente, Karen Ruth Smith, Michael Lance Smith and Brandon Alan Smith; grandchildren, Chloe' Anne Makana Smith and Austin Kamakani Holomua 0' Sanoe Valente, both age 15; sons-in-law, Stephen Smith and Calvin Keoki "Woody" Valente; in-laws, Roscoe Jr. and Marjorie Grubbs and their family; many loving friends; and special caregiver, Donna Brubaker.

Frank Smith was born March 10, 1929, in Dallas. At age 15, he entered the Merchant Marines and served with the Seaborne Army Transport Service during World War II. He married his high school sweetheart, Patsy Grubbs, and they have been married... View Obituary & Service Information

The family of Frank Smith created this Life Tributes page to make it easy to share your memories.