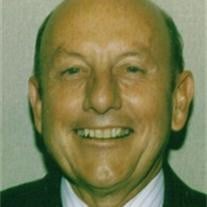 MANSFIELD -- Franklin R. Ewan passed away Monday, April 14, 2008. Funeral: 10:30 a.m. Thursday at Community of Hope United Methodist Church, 1800 E. Debbie Lane, Mansfield. Interment: 1 p.m. at Dallas-Fort Worth National Cemetery, Dallas. Visitation: 6 to 8 p.m. Wednesday at Blessing Funeral Home. Memorials: In lieu of flowers, donations may be made to Community of Hope UMC Building Fund or a charity of choice. He enlisted in the U.S. Air Force in 1953 attaining the rank of lieutenant colonel. During his 29 years in service, he flew the T-33, B-47 jet bomber, the B-58 supersonic bomber and the C-130 cargo plane. He was given the privilege of flying the last B-58 to the airplane graveyard in Tucson, Ariz. He earned many medals during his commission, including Air Medal four-oak leaf cluster, the Air Force Commendation Medal and the Vietnam Medal. His final commission was the commander of the Indiana Civil Air Patrol. He retired in 1982. Frank was a member of Community of Hope UMC, B-58 Association and Order of Daedalians. He was recently inducted into the Millville High School Sports Hall of Fame as an outstanding scholar athlete in four varsity sports. He was preceded in death by his parents and one sister. Survivors: Wife of 52 years, Dorothy M. Ewan; children, Deborah, Denise and husband Mitch, Darlene and Diana and husband, Brian; brothers, William P. Ewan and wife, Shirley, and Harry A. Ewan and wife, Dolores; sister, Alice Chain and husband, Todd; eight grandchildren; and five great-grandchildren.

The family of Franklin Ewan created this Life Tributes page to make it easy to share your memories.