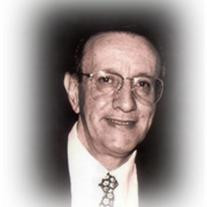 FORT WORTH -- German Comacho Moreno passed away peacefully Wednesday evening, Sept. 14, 2011, during his 71st year. Born May 24, 1940, in Bogota, Colombia, German was the son of Ignacio Moreno Espinosa and Maria Luisa Comacho. After high school, he emigrated to the United States where he graduated from the University of North Alabama. His graduate studies were done at John Hopkins University and St. Johns College.  A master teacher, German taught history, government, French and Spanish in college preparatory schools in Virginia and Maryland before moving to Fort Worth in 1980 to teach at Trinity Valley School, where he taught for 17 years. He was an adjunct professor of Spanish at Texas Christian University before teaching Spanish at All Saints Episcopal school until illness forced him to retire."Profesor," as his students called him, will be remembered for his demanding courses, high standards and animated presentation. He was a serious, gentle and intelligent man who also had a quick wit. An excellent conversationalist, he was interested in both ideas and people. A good cup of Colombian coffee, chocolate, a dry martini, jazz and classical music, a great book, watching Frogs football and walking in the neighborhood with his beloved Sheltie, Guapo, were his favorite pastimes.German was a former member of the board of directors of Ballet Concerto and Clayton Child Care. He was currently a member of Ridotto and enjoyed the Jim Lee Book Club. Survivors: In addition to his sons, Carlos and Sergio; daughter-in-law, Maria; grandson, Joseph; brother Edgar; sisters-in-law, Elena and Cecelia; and their families, German is survived by his best friend of 30 years, Marihelen Hickey; her daughter, Melinda Hickey Cox and her husband, Paul, and their daughters, Emily and Allie; and her son, David Hickey, a loving caregiver to German.

The family of GERMAN MORENO created this Life Tributes page to make it easy to share your memories.