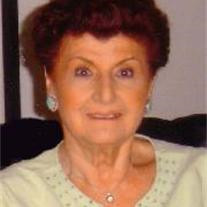 FORT WORTH -- Trudy Rosenberg Kanoff, 75, a loving mother and grandmother, died unexpectedly Saturday morning, March 18, 2006, at a Dallas hospital. ??? Funeral: 11 a.m. Monday in the Barnett Sanctuary at Congregation Ahavath Sholom, 4050 S. Hulen St. Rabbi Alberto "Baruch" Zeilicovich and Javier Smolarz, ritual director, will officiate. Burial: Following committal prayers, Trudy will be laid to rest next to her husband, Seymour, in Ahavath Sholom Cemetery. Visitation: For religious reasons, she will not lie in state. A minyan service will be held at 6 p.m. Monday at the Kanoff residence. ??? Memorials: Mrs. Kanoff's family suggests that, in lieu of flowers, friends may honor her memory by making contributions to Congregation Ahavath Sholom; the American Cancer Society; or to a charity of choice. ??? Born in Brooklyn, N.Y., Aug. 15, 1930, Trudy Rosenberg was the daughter of Morris and Mae Rosenberg. She was married to Seymour Kanoff, who died in 2003. ??? Before moving to Fort Worth in 1977, where her husband was executive director of Koslow's Furs for 24 years, Trudy was past president of Adath Israel Sisterhood. ??? In Fort Worth, she was a member of Congregation Ahavath Sholom and its Ladies Auxiliary. She was a past president of Hadassah, a member of B'nai B'rith and Yad B' Yad. Trudy was a founding member of the "Day-Timers" and a member of its board. ??? She was a "Boutique Lady" at Stein Mart for over 10 years. ??? Survivors: Sons, Stephen Kanoff and his fiancee?, Robin Harris of Dallas and Robert Kanoff of Burlington, N.J.; daughter-in-law, Marcia Kanoff; grandson, Justin; sister, Pearl Lann and her husband, Sid; sister-in-law, Saretta Kanoff; several nieces and nephews; and many friends. Robertson Mueller Harper Funerals & Cremations 1500 Eighth Ave., (817) 924-4233

The family of GERTRUDE KANOFF created this Life Tributes page to make it easy to share your memories.

FORT WORTH -- Trudy Rosenberg Kanoff, 75, a loving mother and...