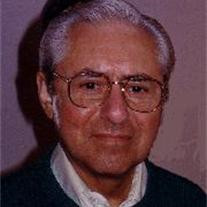 ?FORT WORTH -- Gilbert Edward Friedson, 74, a beloved husband, father and grandfather, died peacefully Friday afternoon, Dec. 30, 2005, at a local hospital. ??? Services for Mr. Friedson's immediate family will be held in the Beth-El Section of Greenwood Memorial Park. Rabbi Ned J. Soltz of Congregation Beth-Shalom, Arlington, will officiate. ??? Memorials: His family suggests that, in lieu of flowers, friends may honor Gibby's memory by making contributions to the Scottish Rite Hospitals for Burned and Crippled Children or to a charity of choice. ??? A native of Chicago, Ill., Gilbert Edward Friedson was born May 20, 1931, the son of Ernest and Anna Cohen Friedson. He was graduate of R.L. Paschal High School and received a B.S. degree in pharmacy from the University of Texas at Austin. While in college, Gibby, as he was affectionately known to family and friends, was a member of Sigma Alpha Mu fraternity and was on the dean's list in the College of Pharmacy. ??? Mr. Friedson was a Korean War veteran and practiced pharmacy in Fort Worth for almost 50 years. He was a Mason and a member of the American College of Apothecaries. He was also a past president of the Tarrant County Pharmacy Association. ??? In addition to his parents, Gibby was preceded in death by his sister, Rita Deutsch. ??? Survivors: His wife of 54 years, Sondra Markus Friedson; daughter, Laurie Friedson Jones and her husband, Walter; son, David Friedson and his wife, Lisa; grandchildren, Jaclyn and Jessica Jones and Tyler, Tristen and Tatum Friedson; sisters, Harriet Nobelman, Sharon Gean and Adrian Hill; and several nieces and nephews. Robertson Mueller Harper Funerals & Cremations 1500 Eighth Ave., (817) 924-4233

The family of GILBERT “Gibby” FRIEDSON created this Life Tributes page to make it easy to share your memories.