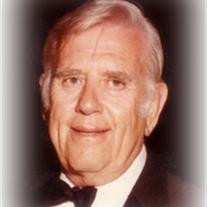 FORT WORTH -- Grover Cleveland Riddle Jr., 86, died peacefully Wednesday morning, Oct. 28, 2009.        Memorial service: 4 p.m. Monday in the Small Sanctuary at Christ Chapel Bible Church, 3740 Birchman Ave. He will be laid to rest in Greenwood Memorial Park. Visitation: Mr. Riddle will lie in state on Sunday afternoon in the Parlor at Robertson Mueller Harper; family and friends will be received in the Great Room from 4 to 6 p.m.        Grover attended Paschal High School and graduated from Allen Military Academy. After serving in the U.S. Army in Korea, he played freshman football at TCU and remained an avid "Frog" for life.        His early work history included deliveries for Renfro Drug No. 14 by bicycle and a stint at 7-11 for 7 cents an hour. Mr. Riddle was a vice president at Fort Worth Mortgage for a number of years prior to forming his own company.        Known as "Ears" to his buddies, he had a quick wit and a charming smile. He loved his family and enjoyed gardening and sports. Grover was generous, kind and loyal with a boundless sense of humor.        Mr. Riddle was a member of the Julian Feild Lodge, AF & AM, Moslah Temple Shrine and its drum and bugle corps. He was also a member of the Royal Jesters Court 32.        He was preceded in death by his parents, Grover C. and Rodessa Nelson Riddle; brother, Dr. Charles Riddle; sisters, Marjorie Wheeler and Dorothy Hudson; and daughter-in-law, Kathy Ferguson.        Survivors: In addition to his wife, Martha Ann Broward Riddle, Grover is survived by his children, John Charles Riddle of Houston and Julie Riddle Slaughter and her husband, Philip, of Fort Worth; grandchildren, Meredith Riddle, Elizabeth Riddle Anders and her husband, David, and Mimi and Andrew Slaughter; sister-in-law, Theda Riddle; and several precious nieces and nephews and their families. Robertson Mueller Harper Funerals & Cremations 1500 Eighth Ave., 817-924-4233

The family of GROVER RIDDLE created this Life Tributes page to make it easy to share your memories.