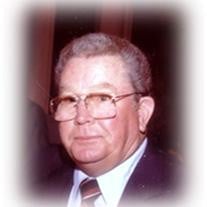 FORT WORTH -- Guy F. "Bud" Woodard died peacefully Saturday morning, July 16, 2011, during his 92nd year. Service; 11 a.m. Tuesday in the chapel at Robertson Mueller Harper with C. Edward Shipman, founder of Happy Hill Farm Academy, officiating. He will be laid to rest privately next to his wife, Babs, in the Mausoleum at Greenwood Memorial Park. Visitation: Family and friends will share laughter and tears immediately after the chapel service. Memorials: In lieu of usual remembrances, consideration of expressions to Happy Hill Farm Academy, 3846 N. Hwy. 144, Granbury, Texas 76048, in his memory, is suggested. A life resident of Fort Worth, Guy was born April 8, 1919, the son of Urnest Laran and Sally O'Dessa Curl Woodard. "Bud," as he was known to family and friends, graduated in 1937 from Central High School, now R.L. Paschal. He was married to Edna Kyle "Babs" Skillman Woodard for 59 years before her death in 2005. Bud joined the U.S. Army Air Corps and served in the European theater during World War II. He was co-owner of H.B. Stuck Adhesives in Fort Worth and was a co-founder of Glastron Boats. A longtime member of Colonial Country Club, Bud served on the board of governors and was active in the club's National Invitation Tournament, where he was head of security. His memberships also included Cooke-Peavy Lodge 1162, A.F. & A.M. Survivors: In addition to his son, Guy Fred Woodard II and his wife, Cecilia of Duncanville, Bud is survived by his daughter, Gale Woodard Florence and her husband, Mike, of Dallas, and their son, Geoffrey Woodard Florence. Robertson Mueller Harper Funerals & Cremations 1500 Eighth Ave., 817-924-4233

The family of GUY "Bud" WOODARD created this Life Tributes page to make it easy to share your memories.