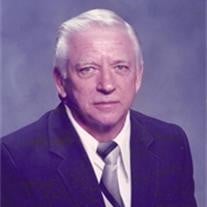 HURST -- Because of God's free gift of eternal life through Jesus Christ, George W. Becker passed into eternity in heaven when he left this life Tuesday, April 10, 2012. Funeral: 2 p.m. Friday at North Richland Hills Baptist Church. Interment: Bluebonnet Hills Memorial Park in Colleyville. Visitation: The family will receive friends 6 to 8 p.m. Thursday at Lucas Funeral Home in Hurst. George was born in 1931 in Festus, Mo., to George P and Anna Whit Becker. He attended Festus High School and graduated in 1949. He entered the Air Force in 1952 and was stationed in Wichita, Kan., where he met his wife, Barbara Waterfield Becker. George and Barbara had two children, Debbie and Bob. George went to work for the National Weather Service in 1958 and this is what led him to Texas. They lived in Stephenville in the 1970s and George graduated from Tarleton State University in 1976 with a bachelor of applied arts and sciences, but they spent most of their married life in Euless and were very involved in the ministries of First Baptist Church of Euless. George retired from the National Weather Service in 1994 and was able to spend time with his favorite hobbies of woodworking and fishing. He and his son, Bob, spent many hours fishing together. George and Barbara were married for 31 years before her death in 1986. In 2000, George was fortunate to marry a beautiful lady, Jean Mashaw Becker. George and Jean have been active members of North Richland Hills Baptist Church. As he battled cancer during his final two years, Jean was his loving caregiver and encourager. He loved her dearly. Survivors: Wife, Jean; his children, Debbie and her husband, Charles Sullivan, of Keller and Bob and his wife, Cathy, of Stephenville; stepson, Tommy Joe Mashaw and his wife, Belinda, of Jasper; stepdaughter, Ann Gore of Forney. Bob and Cathy gave him two grandchildren, Crystal and Michael. Debbie and Charles gave him a grandson, Dustin. His stepgrandchildren are Nicole Mashaw of Jasper, Kristin Donovan of Forney and Todd Horn of Dallas. His only sibling, Thelma Becker Fortney, still lives near their hometown in Missouri. George is also survived by great-grandchildren and great-great-grandchildren.

The family of George Becker created this Life Tributes page to make it easy to share your memories.

HURST -- Because of God&#39;s free gift of eternal life through Jesus...