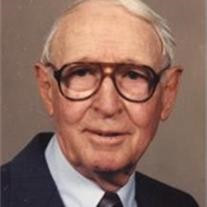 MANSFIELD -- Glenn Morris Day Jr., 91, a World War II veteran and Texas Highway Department retiree, passed away Sunday, Aug. 10, 2008, in Fort Worth. He was a beloved husband, father, brother and grandfather. Mr. Day was born July 12, 1917, in Mansfield, the son of Glenn Morris Day Sr. and Mary Loretta Day. After high school, he attended Texas Tech University in Lubbock, where he studied civil engineering and was a member of the ROTC. In 1942, he entered the U.S. Army as a reconnaissance officer to serve his country during World War II, achieving the rank of captain. Campaigning overseas in Africa, Sicily, France, Germany, Belgium and Holland, he participated in the invasion of Normandy, the Battle of the Bulge and the liberation of Paris. On D-Day, his unit was one of the first to land on Omaha Beach. He received many honors and awards, including the Purple Heart, the Bronze Star Medal, the EAME (European, African, Middle Eastern) Theater Ribbon with seven bronze battle stars and bronze arrowhead, the Good Conduct Medal, and the Distinguished Unit Badge. After he returned home from the war, he married his lifelong love, Ann Driskell Day, on Valentine's Day 1946, and they remained married until her death in 2004. They made their home in Mansfield and had four children. He joined the Texas Highway Department and worked as a civil engineer for 38 years until his retirement. He enjoyed many hobbies including fishing, woodworking, camping, reading, playing cards and dominoes and spending time at the Mansfield Senior Center. He was an active parishioner at St. Jude Catholic Church in Mansfield, where he was a member of the Knights of Columbus. Survivors: Son, Glenn Morris Day III of Arlington; daughter, Angie Englert and husband, Donald, of Mansfield; daughter, Margaret Samson and husband, Bob, of Mansfield; daughter, Jeany Cooper of Arlington; sister, Ann Andrew of Kingwood; grandchildren, Melissa Englert and fiance, Ryan Tetens, of Arlington, Sarah Samson of Arlington and Catherine Samson of Mansfield; family friends, Linda Haskins of Houston, Jim Miller of Fort Worth; several nieces and nephews; and numerous loving family and friends.

The family of Glenn Day, created this Life Tributes page to make it easy to share your memories.