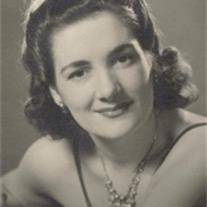 RENDON -- Gwendolyne "Gwen" Irene Bradshaw Sheffield, 90, died Sunday, March 2, 2008, in Fort Worth. Memorials: In lieu of flowers, memorials may be made to a favorite charity. Gwen was born July 22, 1917, in Winnipeg, Manitoba, Canada. During the 1930s, Gwen became Canada's first female disc jockey and served as the late-night emcee of CKY Radio Winnipeg "Lonely Hearts" program, on which she premiered the now-amous tune "I'll Never Smile Again." She was featured as lead vocalist with Herbie Brittain's Dance Band and known as the "Song Bird of Winnipeg." It was at one of these programs during World War II that she met an Army Air Corps lieutenant from Texas, Lendon "Lindy" Sheffield. Lindy and Gwen were married Oct. 14, 1944, in Denver, Colo. She returned to Canada for a year while he finished his last overseas tour in the Pacific. Upon his return, they settled in Rendon and reared four children. Gwen passed her strong religious devotion and love of God to her family and community. A favorite verse was "Be ye kind one to another." She was an integral part of Retta Baptist Church, where she served as choir director for decades, touching the lives of generations of families. Her greatest joy, however, was singing with the little children in Sunday school. Gwen also sang at countless funerals around the Metroplex, providing comfort to families in their time of need. Gwen was a loving wife, mother, sister and friend. God in His infinite wisdom gifted us with Gwen on this earth. He has called her home. She was preceded in death by her father and mother, Harry and Eva Bradshaw, and sister, Dorothy Gregory. The family wishes to extend a special thank-you to Dr. Carlos Japas at Huguley Hospital, the emergency room staff and the entire PCU staff for the compassionate care you gave Mom. "Her children rise up and call her blessed; Her husband also, and he praises her." - Proverbs 31:28. Survivors: Husband, Lendon Sheffield of Rendon; children, Carolynne and husband, Gordon, Bobbitt of Schertz, Chuck and wife, Patty Sheffield, of Dallas, Suzanne Hopson of Bedford and Linda and husband, Don Crum, of Midlothian; granddaughters, Kelli and husband, Jason Rodda, of Azle and Leslie Hopson of Indiana; great-grandchildren, Reese and Molly Rodda; sister, Lorraine Bradshaw of Vancouver, Canada; numerous Canadian cousins; and her very special Texas family.

RENDON -- Gwendolyne "Gwen" Irene Bradshaw Sheffield, 90, died Sunday, March 2, 2008, in Fort Worth. Memorials: In lieu of flowers, memorials may be made to a favorite charity. Gwen was born July 22, 1917, in Winnipeg, Manitoba, Canada. During... View Obituary & Service Information

The family of Gwendolyne Sheffield created this Life Tributes page to make it easy to share your memories.