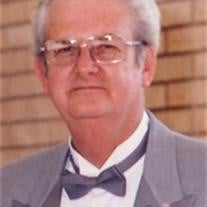 IRVING -- H.B. Wofford Jr., 85, passed away on Thursday, June 23, 2011.        Service: 1 p.m. Monday at Lucas Sylvania Funeral Home, with Pastor Eloy Gonzalez of Our Redeemer Lutheran Church in Irving officiating. Interment: following the service in Mount Olivet Cemetery. Visitation: The family will receive friends 6:30 to 8 p.m. Sunday at Lucas Funeral Home.        H.B. was born March 30, 1926, in Cleburne during a rare snowstorm. He passed away peacefully on June 23 after having "survived damn near everything" as he would say. In 1933, H.B.'s family moved to Saginaw. The morning after he graduated from North Side High School in Fort Worth, he enrolled at North Texas Agricultural College in Arlington. H.B. finished three semesters of engineering study before enlisting in the U.S. Navy where he served until July 1946 as an aviation electronics technician mate third class.        He completed two years at NTAC and transferred to the University of Kansas in Lawrence, where in June 1949 he graduated with a bachelor of science degree in petroleum engineering. Over the next 40 years, H.B. worked as a registered professional engineer. He retired on Jan. 1, 1988.        H.B. married Mary Lorene Spears on Oct. 16, 1947, and they were devoted to one another for 64 years. H.B. and Lorene spent most of their retirement enjoying their four grandchildren and delving into the genealogies of their families. In 2005, H.B. wrote that he and Lorene had "essentially completed the genealogy work." They survived most of their families and only have a few scattered nieces, nephews and cousins left. "We enjoy our children and grandchildren and so far have coped with the occasional, emotional roller-coaster rides. All in all, we have had long and happy lives."        H.B. was preceded in death by his parents, Harvey Benton and Grace Foster Wofford, in 1972; daughter, Diane Elaine Wofford; and sisters, Mary Louise Koegel and Patricia Ann Ingram.        Survivors: H.B. is survived by his wife, Lorene; daughter, Carrie Beth Wofford Harlow; son, William Benton Wofford and his wife, Lisa Diane Schutz Wofford; grandchildren, William Clayton Harlow, Veronica Claire Harlow Erwin and her husband, Brandon Erwin, Alesia Nicole Wofford and Matthew Benton Wofford; and great-granddaughter, Kaitlyn Grace.

The family of H. Wofford, created this Life Tributes page to make it easy to share your memories.