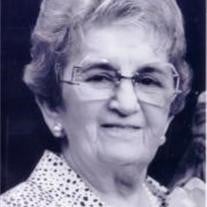 FORT WORTH -- Hannah Chicotsky Sandler, 94, a longtime resident, died peacefully Friday morning, Jan. 5, 2007. Funeral: 2 p.m. Monday in the Kornbleet Memorial Cemetery Chapel, 411 N. University Drive. Rabbi Alberto "Baruch" Zeilicovich and Javier Smolarz, ritual director, will officiate. Burial: Following committal prayers, Hannah will be laid to rest next to her husband, Louis, in Ahavath Sholom Cemetery. Minyan services will be held on Monday at the residence of Candy and Eric Jackson, beginning at 6 p.m. Memorials: For religious reasons, no flowers can be accepted. Consideration of contributions to the Alzheimer's Association, 1400 W. Fifth St., Fort Worth 76102; Vitas Hospice Charitable Fund, 2501 Parkview Drive, Fort Worth 76102; or to Hadassah, in memory of Hannah, is suggested. Born Chne Chicotsky in Lomza, Poland, on April 10, 1912, she emigrated to the United States in 1920. She came through Ellis Island with her mother, Gertrude; brother, Dave; and sister, Rose, settling in Fort Worth with their father, Morris J. Chicotsky. Years later, she met her beloved Louis L. Sandler, whom she married in 1937. With her husband, father and brother, they began a legacy, Chicotsky's Fine Foods, one of the first supermarkets in Fort Worth. She was the "Chicotsky greeter" and no one passed through the front door without her welcoming them with one of her famous smiles. She was the buyer for the legendary "household department," which boasted the finest "gift shop" in the city. The store, along with the gourmet items, specialty items, prime meats and hand-picked produce, was renowned for its personal attention to the customer. It successfully remained in business for almost 50 years. Hannah was involved in many charitable organizations and giving was her greatest attribute. In her petite, under 5-foot frame, she packed a punch and was admired by all who knew her for her unmatched business sense, her graceful style and many creative talents. She could turn a bare room into a showplace, a meal into a scrumptious banquet and remnant fabric from her hems into Barbie courtier. She relished the moments doing each. She was a devoted wife, precious mother, beloved Nana and Great-Grand Nana. "Little Hannah" was a treasure and will be missed and loved eternally. In addition to her parents and adoring husband, Louis, Hannah was preceded in death by her beloved brother and sister, Dave and Rose, and, most recently, her baby sister, Sonja Chicotsky Glazer Gressman, all for whom she is now most likely preparing one of her succulent meals. And with her hair perfectly coiffed, she is no doubt wearing a pair of her most fashionable and notorious high heels. Hannah was a longtime member of Congregation Ahavath Sholom. Survivors: Daughters, Brenda Sandler of Walnut Creek, Calif., and Candy Sandler Jackson and her husband, Eric of Fort Worth; grandchildren, Marc Herman and his wife, Jennifer of Los Angeles, Calif., Kelley Herman Cunningham and her husband, Joe of Danville, Calif., Erin Clinard Willis and her husband, Tim of Dallas and Lindsay Clinard Maresh and her husband, Michael of Austin; nine great-grandchildren; sisters, Sarah Chicotsky Korman of Fort Worth and Lillian Chicotsky Blum of Houston; and many nieces and nephews and their families. Robertson Mueller Harper Funerals & Cremations 1500 Eighth Ave., 817-924-4233

The family of HANNAH SANDLER created this Life Tributes page to make it easy to share your memories.