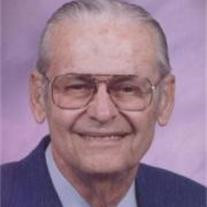 Howard Bishop Bradley, a resident of Mansfield since 1999 and previously of Trophy Club for 19 years, passed away Wednesday, Feb. 21, 2007, in Mansfield. Graveside service: 1 p.m. Tuesday in Dallas-Fort Worth National Cemetery, Lane A. Please line up at the cemetery after 12:30 p.m. Memorial service: 2:30 p.m. Tuesday at St. Gregory's Episcopal Church, 1091 Country Club Drive, Mansfield. Memorials: In lieu of flowers, donations may be made to Texas Scottish Rite Hospital for Children. Howard was born in Chicago, Ill., on March 24, 1920, and spent his childhood in Chicago and St. Louis. He came to Dallas in 1935, graduating from Woodrow Wilson High School in 1938. He attended NTAC and later the University of Texas, receiving a BS in 1944 and MS in 1950 in petroleum engineering. Bradley helped establish the petroleum engineering curriculum in the School of Mines at the University of Alabama, where he served as assistant professor of petroleum and natural gas engineering in 1949 and 1950. A veteran of World War II and Korea, he served as a line officer in the U.S. Navy amphibious forces of the American Asiatic and Pacific theaters and retired as a lieutenant commander with 20 years of service largely in the retired reserves. Employed in 1953 as a senior research engineer by Magnolia Petroleum Co.'s Duncanville research laboratory, he later became supervisor of technical training and from 1968 to 1980 was adviser to and then manager of corporate technical training for Mobil Oil in New York City. He retired in 1982 with 29 years of service. He was co-author of five technical papers and two handbook chapters in petroleum technology and author of "U.S. Navy Tank Tester Manual." He was chairman for seven years of the Society of Petroleum Engineers' Symbols and Metrication Committee, indexer of SPE's five technical magazines from 1959 to 1993 and editor in-chief of SPE's Petroleum Production Handbook, published in 1987. He received the Society of Petroleum Engineers' Distinguished Service Award in 1986. He was a member of St. Gregory's Episcopal Church in Mansfield, former member of St. Alban's in Arlington and St. Martin's in the Fields in Keller. In retirement, our "Pop" enjoyed golfing and took great pleasure in his five grandchildren. Survivors: Wife of 66 years, Ophelia Brown Bradley; son, Christopher and wife, Lynn, of Houston; daughter, Earline Gay Smith of Mansfield; grandchildren, Stephen and Carolyn of Houston and Jason, Justin and Zeb of Mansfield; brother, James D. Bradley, and wife, Pat, of San Antonio; nephew, Phillip Bradley; and niece, Michelle Bradley.

The family of Howard Bradley created this Life Tributes page to make it easy to share your memories.

Howard Bishop Bradley, a resident of Mansfield since 1999 and...