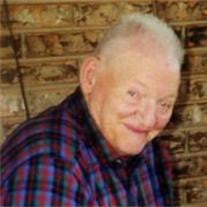 MANSFIELD -- Hugh Willard "Gene" Hogan 77, a beloved husband, father and grandfather, peacefully entered into heaven Sunday morning, July 1, 2007, surrounded by his loving children. Celebration of life: noon Monday, July 9, in Blessing Funeral Home Chapel in Mansfield. Burial: Dallas-Fort Worth National Cemetery in Grand Prairie. Gene was born in Haltom City on May 4, 1930, and his family moved to Mansfield in his early childhood. It was while growing up in Mansfield that he met his wife, Mary Lee Rogers. Gene joined the Marine Corps in 1947 and served five years active duty in Guam and China. While on reserve status, he was called back into to full active duty for the Korean War for 18 months as a staff sergeant. After his tour of duty in the Korean War, Gene received his honorable discharge after six years of proud military service for his country. Upon returning home, Gene entered the steel industry as his life career. Gene was preceded in death by one son, Hugh Willard Hogan Jr. Survivors: Wife of 56 years, Mary Lee Hogan; daughters, Linda Andrews and husband, David, of Temple and Patricia Hogan-Mathis and husband, Mark, of Fort Worth; sons, Floyd Hogan and wife, Nancy, of Gilmer and John Hogan and wife, Shalee, of Mansfield; 15 grandchildren; 13 great-grandchildren; sister, Ernestine Kalizewski; and extended family.

The family of Hugh Hogan created this Life Tributes page to make it easy to share your memories.