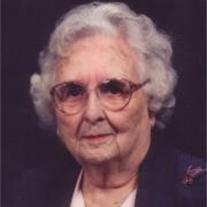 FORT WORTH -- Imogene Copenhaver Jansen, 99, died Friday morning, Nov. 16, 2007, after a fall at her residence. Funeral: 1 p.m. Tuesday, Nov. 20, in the sanctuary of University United Methodist Church. The Rev. Don Scott, former pastor of the church, and the Rev. Verne Fuqua, former associate pastor of the church, will officiate. Following the service in the church, Imogene will be laid to rest next to her husband, Dan, in Greenwood Memorial Park. Honorary bearers for Mrs. Jansen will be her nephews, Eldon Janzen and Richard Janzen. Bearers of her casket will be her great-nephews, Daniel Castleberg, Weston Castleberg, Doyle Janzen, Eric Janzen, Trine Owen and cousin, Derrick Dishner. Memorials: In lieu of usual remembrances, consideration of contributions to the Daniel E. Jansen Scholarship Fund at Bethel College, 300 E. 27th St., Newton, Kan. 67117, or to the Organ Fund at University United Methodist Church, 2416 W. Berry St., Fort Worth 76109, in Imogene's memory, is suggested. A native of Fort Worth, Imogene was born July 19, 1908, the daughter of Walter Barrett and Emma Sprinkle Copenhaver. After graduating from high school, she attended Texas Woman's College, now Texas Wesleyan University, and became a teacher in the Fort Worth ISD. Imogene married Daniel E. Jansen on June 9, 1935. The couple had lived in San Francisco, Calif., and Ada, Okla., before moving back to Fort Worth in 1966. Mr. Jansen died in 1986 after 51 years of marriage. She was a member of University United Methodist Church and its Kum Duble Sunday School Class and United Methodist Women. Her memberships also included the Woman's Club of Fort Worth, where she was active in its library, the Sorosis Club, the Order of the Eastern Star, Chapter 200, in Clinton, Okla., and she was a Perpetual 1 Member. Survivors: Her nieces, Marilyn Jansen Owen and her husband, Dean, and Martha Jansen Baskin and her husband, David, all of Fort Worth; and nephews, Eldon Janzen and his wife, Caroline, and Richard Janzen and his wife, Charlene, all of Newton, Kan., and their families; and cousins. Robertson Mueller Harper Funerals & Cremations 1500 Eighth Ave., 817-924-4233

The family of IMOGENE JANSEN created this Life Tributes page to make it easy to share your memories.