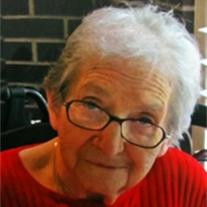 FORT WORTH -- Irma Jeanne Hollander died peacefully Thursday afternoon, Jan. 20, 2011, shortly before her 89th year.        Service: 2 p.m. Sunday in the Kornbleet Memorial Cemetery Chapel in Ahavath Sholom Cemetery, 411 N. University Drive. Rabbi Gary Perras will officiate. Following committal prayers, Irma will be laid to rest in the cemetery. Shiva and minyan will be held at the home of Rich and Terri Hollander, beginning at 6 p.m. Sunday.        Memorials: In lieu of flowers, consideration of contributions to Hadassah, the Parkinson's Disease Foundation, Congregation Ahavath Sholom or to a charity of one's choice, in her memory, is suggested.        Born in Cleveland, Ohio, on Feb. 5, 1922, Irma was the daughter of Morris and Sophie Pearlstein Rabinoff. She moved with her family to New York City at the beginning of the Depression where she finished high school and went to Hunter College.        Irma met Harold "Bud" Hollander in a New York taxi - he was the driver; they married six weeks later. An "Air Force family," they spent many years at Travis AFB in Fairfield, Calif., but Bud's assignments also took them to Hawaii, Peru and Panama over the years, until his retirement brought the family back to Fairfield, where Irma worked at the dental clinic on base until her retirement. She moved to Fort Worth six years ago to be closer to family.        Always involved in the community, Irma was on county election boards for many years. She served terms as president of PTA and Band Boosters while her children were in school. In later years, she was active in Hadassah and Toastmistress. And, as president of the Solano County Chapter of the Society of Military Widows, she became involved in national affairs to insure that benefits promised to military widows were delivered.        Irma loved cooking, especially baking, reading, needle point, cross-stitch, crocheting and sewing. She really missed these activities during the last few years due to Parkinson's and poor vision.        She was preceded in death by her husband, who died in 1974, and son, Michael Hollander.        Survivors: In addition to her sons, Richard Hollander and his wife, Terri, of Fort Worth, and Donald and his wife, Julie, of Wellington, New Zealand, Irma is survived by her daughter-in-law, Sandra Horwitz of Redondo Beach, Calif.; grandchildren, Becky Moroneso and her husband, Steve, Mandy Hollander, Nicholas, Anna, Sarah and Max Hollander and Sharon Hollander; great-grandchildren, Zachary and Sophie Moroneso; sister, Frances Guralnick of Agoura Hills, Calif; and nieces and nephews and their families. Robertson Mueller Harper Funerals & Cremations 1500 Eighth Ave., 817-924-4233

The family of IRMA HOLLANDER created this Life Tributes page to make it easy to share your memories.