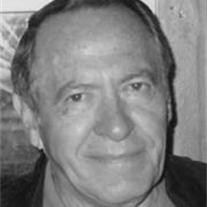 AUSTIN -- Irvin Leva, 87, a devoted husband, father, grandfather, brother and uncle, died peacefully Saturday, Jan. 13, 2007, at his residence in Austin. Funeral: noon Wednesday at Congregation Ahavath Sholom, 4050 S. Hulen Street. Rabbi Alberto "Baruch" Zeilicovich will officiate. Burial: Following committal prayers, Irvin will be laid to rest in Ahavath Sholom Cemetery. Minyan services will be held Wednesday at Congregation Ahavath Sholom beginning at 6 p.m. Memorials: The family respectfully requests that no flowers be sent. However, those desiring please make memorial contributions in Irvs name to Congregation Ahavath Sholom, 4050 S. Hulen St., Fort Worth 76109; Congregation Agudas Achim, 7300 Hart Lane, Austin 78731; the Alzheimers Association; or to a charity of choice. A native of Fort Worth, Irv was born May 1, 1919, the son of David and Rebecca Leva. He was reared and graduated from high school in Lubbock. Irv married Margaret Anton on March 9, 1944. There was no time for a honeymoon, as Irv was on a three-day pass while serving in the U.S. Army during World War II. He attained the rank of master sergeant before being honorably discharged in 1945 after serving more than four years and being awarded a Bronze Star medal. Irv again served in the military, volunteering for duty during the Korean War. Irv and Margaret (whom he affectionately called "Lou") lived in Fort Worth, Dallas, Hobbs, N.M., Salt Lake City, Indianapolis and Omaha. They returned to Fort Worth in 1964 where they stayed until 2000, when Irv suffered a stroke and Margaret relocated for health reasons to Austin to be near their sons, Larry and Carey. Irv was truly a "self-made man." His business career included restaurant management, 14 years in sales and management with Zales Jewelry, apartment management in Fort Worth ("Big Tex Apartments"), and owner-operator of American Waste Disposal Inc., a commercial waste disposal company, where his AWDI trucks proudly bore the slogan "Satisfaction Guaranteed or Double Your Garbage Back." Irv retired in 1980 when AWDI was acquired by a competitor. Irv loved to laugh and was always telling jokes. As his illness progressed, gradually robbing him of his memory and recognition of loved ones, he could still deliver the one-liners that kept his attendants in stitches. Upbeat to the end, he died with a smile on his face. Irv enjoyed boating, fishing, bowling, card games, Cowboys football, and, basically, just being around people. In retirement Irv and Margaret traveled often, especially during the summers when they would spend time at their lake house in Hayden Lake, Idaho, to be near their son, Gary, and his family who lived in Spokane, Wash. Irv and Margaret were active volunteers, including 15 years at All Saints Hospital in Fort Worth. Irv was a longtime member of Congregation Ahavath Sholom, Bnai Brith and the Jewish War Veterans and was a charter member of the Masonic Lodge and a life member of the Moslah Temple Legion of Honor. In addition to his parents and wife, Margaret, Irv was preceded in death by his five siblings, Jenny Feldman, Dora Gilula, Harry Leva, Ben Leva and Mary Pullman. The family would also like to express its gratitude for the loving care Irv received at Garden Terrace in Fort Worth and Arden Courts and Heartland Health Care in Austin. Survivors: Sons, Gary Leva and his wife, Christine of Spokane, Wash., Larry Leva of Austin and Carey Leva and his wife, Elizabeth, also of Austin; grandchildren, Darren, Emily, Meredith, Jami and Blake Leva; and many beloved nieces and nephews. Robertson Mueller Harper Funerals & Cremations 1500 Eighth Ave., 817-924-4233

The family of IRVIN LEVA created this Life Tributes page to make it easy to share your memories.