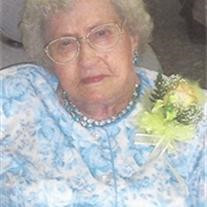 BEDFORD -- Imogene Kelly Ross, 93, a loving Christian mother, grandmother and great-grandmother, passed from this life on Christmas Day, Dec. 25, 2008.        Funeral: 10 a.m. Monday at Brown Trail Church of Christ, Bedford. Interment: 10 a.m. Tuesday in Elm Grove Cemetery in Alpine. Visitation: 4 to 6 p.m. Sunday at Lucas Funeral Home, 1321 Precinct Line Road, Hurst.        Memorials: Brown Trail School of Preaching, Truth in Love, care of Brown Trail Church of Christ, P.O. Box 210667, Bedford, Texas 76095; or Alpine Church of Christ.        She and her husband, Charlie, moved to Alpine in 1937, where she worked in the city tax office for 16 years before being elected to serve in the office of Brewster county clerk. She held this position for 10 years. This was at the time when Alpine held the title of being the biggest town, in the biggest county, in the biggest state in the United States. She faithfully attended Alpine Church of Christ for the many years that she lived there, missing hardly a single Sunday service or Wednesday night. She was a dedicated Christian and would want to be remembered for that, more than for any of her other accomplishments. She was active in civic events, even up until her last few months of life. She voted in every election, even when she was unable to be transported to the voting booth and had to request a ballot and vote by mail.        Imogene was preceded in death by both parents; her husband, Charlie Ross to whom she was married for 41 years; one daughter; one sister; two brothers; and great-grandson, Frazier Riggs.        Survivors: Daughter and son-in-law, June and Bob Carrothers of Denton; daughter, Doris Ross Weatherman of Alpine; grandchildren, Steve Carrothers, Kim Hutto and husband, Hut, Scott Carrothers and wife, Annette, ViCindy Riggs, Guy Wayne Weatherman and wife, Jamie, and BiLindy Sneed and husband, Lee; 12 great-grandchildren; one great-great-granddaughter; and a sister, Ruth Hayes of Monahans.

The family of Imogene Ross created this Life Tributes page to make it easy to share your memories.